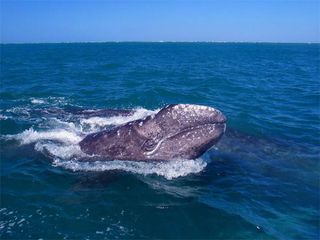 The sea giants, which can reach a length of 50 feet (15 meters) and tip the scales at 35 tons (32,000 kilograms), were hunted nearly to extinction by whalers in the late 19th century.

But new research suggests the eastern gray whales are still having a tough time.

"It suggests the gray whale population we have now isn't fully recovered from whaling," said study team member Stephen Palumbi of Stanford University's Hopkins Marine Station. "If the ocean was able to support them the way it used to, then the population would continue to grow."

S. Elizabeth Alter, also of the Hopkins Marine Station, and her colleagues compared genetic variability among 42 eastern gray whales. Both the western and eastern populations are so similar genetically, those figures allowed the team to back-calculate the total historical population, Palumbi said.

Since these DNA changes don't show up for years and years, the current variability indicates the past population size, which they calculated at 76,000 to 118,000 animals (average of 96,000).

The finding, published in the Sept. 10 issue of the Proceedings of the National Academy of Sciences, has implications for current conservation efforts of the 22,000 eastern gray whales or so in the planet's seas.

The eastern gray whale population was growing in the 1990s, and then in 1999 and 2000, it hit a "bump," and several whales reportedly washed ashore emaciated. The whales then seemed to recover somewhat, until this year when scientists observed signs of starvation.

Scientists had assumed the starvation was due to the whale population reaching its historical ecological limits. But if the new estimate is correct, the ocean habitat should be bountiful enough to support many more gray whales.

The starving could be a consequence of a reported shift in the Arctic ecosystem, in which the whales' main food supply (crustaceans) has been pushed out due to warming waters, the scientists suggest.