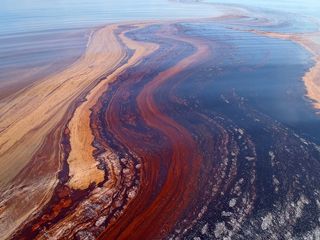 The area around the Deepwater Horizon oil spill has been plagued by surface sheens and other problems.
(Image: © Luke McKay, University of Georgia)

Officials with the U.S. Coast Guard and petroleum giant BP are baffled by a mysterious sheen that keeps appearing on the surface of the Gulf of Mexico near the site of the April 2010 Deepwater Horizon oil spill.

Robotic submarines (also called remotely operated vehicles, or ROVs) have been used to make regular inspections of the damaged oil rig since September 2010 to ensure that it's not leaking any additional oil. The latest inspection confirmed that the rig, now entombed in an immense concrete containment dome, is not leaking oil, according to the Associated Press.

However, an unusual sheen on the surface of the water was spotted in September. Workers sealed what they thought was the source of the sheen shortly thereafter, but on Nov. 2, another sheen was reported in the same area.

While the cause of the recurring sheen isn't yet known, a potential clue has emerged: a white, cloudy substance collected from several places on the overturned oil rig, according to the Associated Press. Officials are now awaiting lab results that should identify the surface sheen and the white substance collected underwater, in hopes of determining the source of the sheen.

The Deepwater Horizon oil spill released about 205 million gallons (776 million liters) of oil, making it the nation's largest oil spill. The region of the Gulf of Mexico around the spill has been plagued by problems ever since. An unusually high death rate for dolphins has been reported in the area, and tar balls containing potentially deadly bacteria have been spotted on the region's beaches.