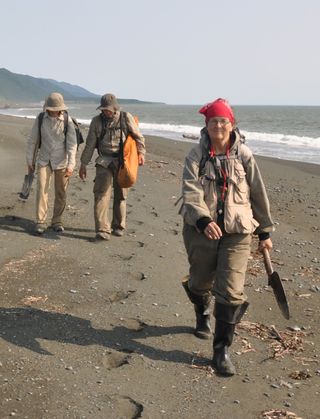 Scientists walk along the shore in their protective bug suits, called "encefalitka" in Russian because they were designed for areas where the bugs carry encephalitis. Fortunately, said Joanne Bourgeois, the breezy shore helps keep bugs away and those found on the Kamchatka Peninsula and Kuril Islands are fairly benign.
(Image: © Joanne Bourgeois)

More than two decades after the collapse of the Soviet Union, researchers are just beginning to understand seismic hazards in the Russian Far East that had been hidden behind the Iron Curtain.

The seismically active Kamchatka Peninsula and the Kuril Islands lie along the eastern edge of Russia. Several destructive seismic events — including a magnitude-9 earthquake, deadly and costly tsunamis and a volcanic eruption that halted air traffic — have originated in these remote locales over the past century, but international scientists have just begun studying the region in the last two decades.

Understanding seismic hazards in the Russian Far East is important for the global economy and the safety of the entire Pacific Rim, said Joanne Bourgeois, a seismologist at the University of Washington who has been studying the region for the past 17 years.

"Tsunamis from the region are directed toward the Americas, so when you're assessing hazards in Hawaii or the U.S. Pacific coast, you have to take that into account," Bourgeois told OurAmazingPlanet. "There's still going to be a global economic impact, even if the event itself stays home." [7 Most Dangerous Places on Earth]

A deadly earthquake and tsunami struck Kamchatka in 1952, but the Soviet government released very little information about the event for fear of appearing vulnerable along its eastern coast, Bourgeois said.

In fact, until the 1990s, no one outside the Soviet government had studied the seismic risks of Kamchatka and the Kurils; the region wasn't even completely open to Soviet citizens.

"The Soviets had a strong and sophisticated seismic research program, even though the government didn't officially accept the concept of plate tectonics until the mid-'80s," Bourgeois said. But the data their seismic program collected in Kamchatka and the Kurils — if any — has never been made available.

"Science in the Soviet Union was a different animal than we're used to here," she said.

Now that the region is more accessible politically, researchers deal with other challenges — transportation, bears and bugs are the biggest ones.

Most study sites on the Kamchatka Peninsula and Kuril Islands are generally only accessible by helicopter, boats or amphibious tanks, Bourgeois said. There's only one main road on Kamchatka, and fieldwork typically involves a lot of hiking and backpacking.

Though the bears that roamed the region used to top her list of worries, Bourgeois says she's now more concerned with smaller pests.

"Our biggest problem on a day-to-day basis is bugs," she said. Her team has taken to wearing traditional Russian field outfits called encefalitkas, which are made of heavy, fast-drying cotton and face screens that bugs can't bite through.

The biggest task ahead for researchers is estimating the magnitude of historic seismic events and reconstructing historical shorelines, which often preserve tsunami deposits, Bourgeois said.

"We need to develop a better understanding of recurrence intervals," she said. "We can give estimates like five events per thousand years, but it's important to understand an average is only an average — not a guarantee that the next hundred and some years will be calm."

The work is important because events originating in the Kamchatka-Kuril subduction zone, where the Pacific Plate is sliding under the Okhotsk Plate, often have far-reaching effects.

A tsunami from the 1952 magnitude-9 quake reached Hawaii, and a tsunami from a magnitude-8.3 quake in 2006 caused $10 million of damage along the coast of California.

Those impacts could be amplified if an unexpected tsunami were to hit a critical facility, such as a nuclear power plant. Engineers and officials must have a solid understanding of all possible hazards when planning critical facilities, Bourgeois said — and along the entire Pacific Rim, those hazards include seismic activity and tsunamis originating in the Russian Far East.