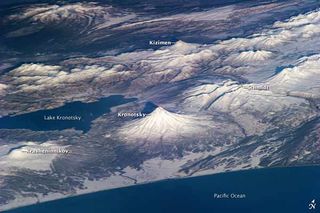 Kamchatka Krai Russia, is home to one of the most active volcanic regions in the world.
(Image: © ISS Crew Earth Observations experiment and Image Science & Analysis Laboratory, Johnson Space Center.)

This photograph, taken on Nov. 19 by astronauts aboard the International Space Station, shows the snow-covered volcanoes of Russia's Kamchatka Peninsula.

Kamchatka Krai Russia, where the peninsula is located, is home to one of the most active volcanic regions in the world. Overall, 114 of the volcanoes on the Kamchatka Peninsula have erupted since the start of the Holocene Epoch (approximately 12,000 years ago).

The Kamchatka Peninsula lies along the Pacific Ring of Fire . The volcanic arc that rings the Pacific Ocean is characterized by active volcanoes and frequent earthquakes associated with the many active and transform boundary zones around the Pacific tectonic plate.

In this image, the Kronotsky and Kizimen stratovolcanoes (tall, conical volcanoes composed of a layer of hardened lava, fragmented material produced by a volcanic eruption and volcanic ash) are distinguished by their symmetrical cones. Kizimen last erupted in 1928, while Kronotsky one of the largest on the peninsula last erupted in 1923.

These volcanoes sit between the Pacific Ocean and Lake Kronotsky, Kamchatka's largest lake. The lake formed at the end of the Pleistocene (approximately 15,000 years ago) and the beginning of the Holocene when extensive lava flows on the south side of Kronotsky volcano dammed the Listvenichnaya River, according to the Smithsonian Institute's Global Volcanism Program.

Schmidt Volcano, to the north of Kronotsky, has the morphology of a shield volcano (a type of volcano found on the Hawaiian islands and built almost entirely of fluid lava flow ) and is not known to have erupted since humans have been keeping records. To the south is Krasheninnikov, which is actually a set of overlapping stratovolcanoes that formed within an earlier caldera, or volcanic crater. Krasheninnikov may have last erupted in 1550. Two summit craters are clearly visible.