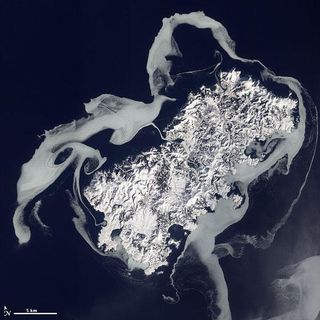 Ostrov Shikotan (or Shikotan-to) is a volcanic island at the southern end of Russia's Kuril Islands chain , part of the Pacific Ring of Fire , and is seen here surrounded by sea ice.

At about 43 degrees North latitude more than halfway to the equator Shikotan lies along the extreme southern edge of the range where winter sea ice forms in the Northern Hemisphere.

Although sea ice often forms around Shikotan, the extent varies widely from year to year, and even day to day.

The ice in this image, taken by NASA's Earth Observing-1 satellite, may have formed in a matter of several days, and it is prone to moving with currents.