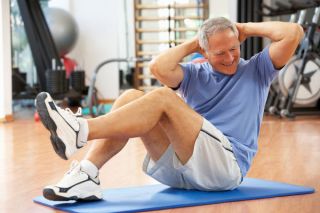 Stroke sufferers often face a long road to recovery, particularly when their damaged limbs are too weak to exercise. Such damage usually manifests itself laterally, with one side of the body more affected than the other.

But scientists at the University of Victoria in British Columbia, Canada, have found that strength training for stroke patients solely on their stronger side will somehow, almost magically, strengthen the weaker side.

They report on this advance in post-stroke recovery in the journal Experimental Brain Research. The result could have huge potential for stroke rehabilitation, because the positive effect was seen even years after the initial stroke and the strength gain was equal on both sides.

"I never imagined that it would come out like this," said E. Paul Zehr, a professor of kinesiology and neuroscience and senior author on the report. "The results exceeded any normal expectations."

Training the "other" side

The study focused on the legs and ankles with an eye toward walking recovery. The participants spent six weeks rigorously exercising their less-affected ankle dorsiflexors, the muscles that flex the foot and enable natural walking. The training was in 25-minute sessions three times weekly.

To their surprise, the scientists found equivalent strength gains in both legs, about 30 percent. Four participants who were barely able to flex their feet on their more-affected side before training could do so post-intervention.

Zehr said his next step is to test cross-education for strengthening the arms and wrists, which also often are severely affected by stroke.

"We went after the ankle dorsiflexors because of the huge weakness issue post-stroke and how it affects walking," Zehr told LiveScience. "We presume we could do the same in the upper limb."

Zehr said the initial strength gains found in the four to six weeks after people start strength training are neurological adaptations, as the brain and nervous system create new connections to the muscles. [10 Amazing Facts About the Brain]

"Up until the kind of work we've done in stroke, this cross-education phenomenon has really been just that: a kind of weird asymmetrical response to training," Zehr said. "Why would someone who could use both sides of the body ever want to do it? Why not just train both sides and get about the same strength gain in each limb? It only has real value when you already have an asymmetry, like in stroke."

Zehr added that a group led by Jonathan Farthing at the University of Saskatchewan has performed complementary research in cross-education for limbs in casts, to prevent muscle atrophy in the immobilized limb.

As to the phenomenon of cross-education, Zehr said this might go back early in our evolution to when our pre-human ancestors walked on all fours. "It likely represents a useful compensatory mechanism when there is damage like in a stroke or spinal cord injury," he said.

Zehr, an expert on how the human nervous system controls movement, also is the author of two popular-level science books, "Becoming Batman" and "Inventing Iron Man" (Johns Hopkins University Press), about the real and nearly viable physical training and neurological underpinnings needed to become a superhero. Strength training is illustrated in these books.