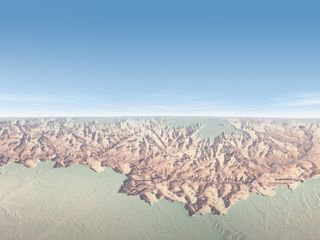 Could the origins of the Grand Canyon lie in an enormous flood?

The answer is no, says geologist Bill Dickinson, an emeritus professor of geology at the University of Arizona in Tucson.

Tracing the history of the Grand Canyon is controversial. The deep gorge exposes a billion years of Earth history in its candy-colored cliffs, but geologists can't agree when it formed, or exactly how.

Dickinson hopes at least to lay to rest one hypothesis: That an ancient lake carved the canyon through a cascading series of waterfalls. A favored concept for two decades, "I don't think it's a valid story, and my main purpose is to dismantle it," Dickinson said of his new study, published Dec. 13 in the journal Geosphere.

Here's the gist of the idea: A giant lake covering eastern Arizona ate through a limestone ridge called the Kaibab uplift, near the eastern end of the present-day Grand Canyon. A torrent of water spilled through the crack, cutting the canyon we see today. The Colorado River then followed the new course that was set.

No lake, no flood

The lake in question, called Hopi Lake or Lake Bidahochi, stretched approximately 112 miles (180 kilometers) across Arizona and New Mexico, a length equivalent to Utah's Great Salt Lake. The sediments left behind sit atop a great unconformity, a missing period of geologic time, with the 8-million-year-old lake silt blanketing the 225-million-year-old pink mudstone that forms the Painted Desert. [Grand Canyon in Pictures]

Called the Bidahochi Formation, the rocks are evidence of a shallow, ephemeral playa lake, not a deep basin large enough to buzz saw its way through the Grand Canyon, Dickinson argues.

"There's no evidence from sedimentology that it was ever a deep lake. It was a hardly a deep playa," Dickinson told OurAmazingPlanet.

Other researchers who have carefully re-analyzed the sediments have also found the lake was not there as long as previously thought, said Richard Young, a geology professor at the State University of New York in Geneseo. "There's no way the lake could have been there for 20 [million] or 10 million years," he told OurAmazingPlanet.

Plus, there's the problem of the Kaibab uplift, a pinch in the Colorado Plateau where the rocks swell up due to underground folding. Sitting near the head of the Grand Canyon, the Kaibab uplift is a 650-foot (250-meter) barrier that any prehistoric lake or river must have carved through before dropping down into the future gorge. The preserved lake beds show water levels were never high enough to cross the uplift, Dickinson said.

Knocking down Hopi Lake leaves a major puzzle: What was the course of the Colorado River before the Grand Canyon deepened? Some geologists think the early Colorado River flowed south into the lake.

Part of the challenge of solving the Grand Canyon's history is that so much has changed in the ensuing millions of years: climate was different then, the topography has changed dramatically, and tectonic forces continue to reshape the plateau.

"There is undoubtedly a true history of how Grand Canyon evolved into what we see today," said Karl Karlstrom, a geology professor at the University of New Mexico in Albuquerque, who was not involved in Dickinson's new study. "The present Grand Canyon is made up of sections each with somewhat different ages and histories. Prior to 6 million years ago, there were paleorivers and paleocanyons whose flow direction and geometry is rapidly getting figured out by the geologic community."

For example, Dickinson points out that the deep canyons and tall mountains that feed today's powerful Colorado River didn't exist 10 million years ago.

"One of the hardest things to hindcast is to know how big a river you're looking for in Grand Canyon country," he said. "What was the river like up in Utah? I hope that if people would just abandon the Hope Lake spillover game, their thoughts would lead them on to worrying about Utah."