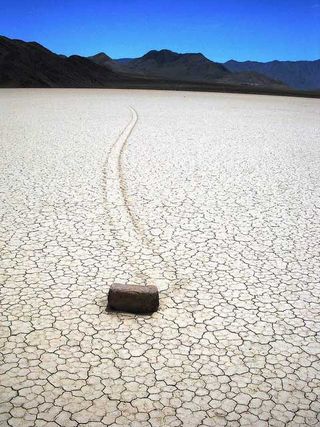 A roaming rock at Racetrack Playa. Scientists have ruled out animals, gravity, and earthquakes as possible culprits for the stones' strange movements.
(Image: © NASA/GSFC/Cynthia Cheung.)

A section of California's Death Valley is home to a strange phenomenon: Rocks that litter the landscape seem to move on their own, leaving long trails behind them in the cracked, bone-dry clay.

These wanderings have baffled scientists for more than five decades. Nobody has ever caught a glimpse of the stones actually moving, yet move they must, because the rocks' locations, and the trails they leave behind them, change over time.

A group of young scientists is taking a crack at solving the puzzle of this odd desert area known as Racetrack Playa.

Most of the wandering stones are about the size of a one-liter soda bottle and far heavier, according to Brian Jackson, a NASA scientist who has been studying the area for more than four years.

"You don't expect 20-pound (9-kilogram) rocks to go sliding across the ground very easily, but they seem to do that on occasion," Jackson said.

Jackson said crackpot theories abound to explain the stones' travels across the playa (a term for a dried-out lake bed), which is about 3 miles (4.5 kilometers) long, almost a mile and a half (2 km) across, and preternaturally flat.

"I've definitely heard aliens, magnetic fields, frat boys from UNLV" — the University of Nevada, Las Vegas — "but nothing really plausible," Jackson said. "There's no way it could really be a hoax, because if someone were pushing them you'd see footprints."

Earlier this summer, a group of interns from NASA's Lunar and Planetary Science Academy, a program run by the Goddard Space Flight Center in Maryland, headed west to study the phenomenon. In addition to collecting GPS measurements and myriad other data, the students retrieved instruments that had been buried in the ground three months earlier. The sturdy little instruments they dug up, called hygrochrons, are about the size of a quarter and measure humidity and temperature; they had been planted by NASA researcher Gunther Kletetschka.

The interns plan to publish a paper this year presenting their findings, which so far seem to back up a current theory that during the winter months, ice forms around the rocks, allowing them to slip across the frozen surface of the playa.

Jackson said the data the interns gathered during their expedition confirmed that the playa had been wet and cold enough over the winter to form ice. "So that's encouraging," he said. "That tells us that at least some of the conditions required to move these rocks were met. It's pretty clear these rocks are assisted by ice somehow." Some scientists think algae blooms may play a role, he added.

Besides looking to Racetrack Playa to help solve mysteries on our own planet, researchers are examining the area to better understand conditions on other worlds. Jackson is co-author of a recent study, led by Johns Hopkins University's Ralph Lorenz, comparing the meteorological conditions of the region to those near Ontario Lacus, a vast, liquid hydrocarbon lake on Saturn's moon Titan.

Jackson said the continuing mystery of the moving rocks doesn't bother him and that, in fact, perplexing problems are a boon to science.

"Science is really all about ignorance," Jackson said. "I think the most exciting science is done in places where you don't understand what's going on. Once you're not confused about something, it's time to move on to the next problem."