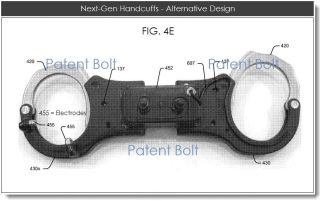 Ordinary handcuffs just won't do if you're Batman trying to restrain a supervillain such as Bane or Killer Croc. Such villains only exist in the comic book world of superheroes, but that has not stopped a California inventor from filing a patent on handcuffs that can either shock or sedate uncooperative prisoners.

The patent filing idea goes far beyond a crude punishment device, according to Patentbolt. The handcuff is envisioned as just one part of a broader prisoner-monitoring system that could intelligently provide electric shocks if a prisoner wandered outside a restricted area — or even inject the prisoner with a sedative or paralytic.

Such cuffs could also monitor the electrical activity of a prisoner's heart and avoid applying a shock if the reading was in the danger zone. The same system might even summon medical help for the prisoner if it detects health issues based on the medical monitoring.

The U.S. Patent Application 20120298119 was filed by Scottsdale Inventions, LLC of Paradise Valley, Arizona on Oct. 29, 2010. There's no word yet on its chances of getting approval from the U.S. Patent Office, let alone whether it would ever become an actual product.

But the idea of remotely monitoring and punishing prisoners may represent a harbinger of future prison surveillance systems anyway. After all, South Korea's robot prison guards have already arrived.