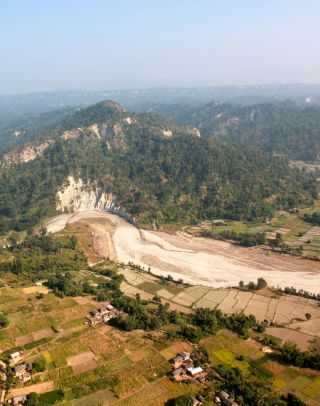 The Sir river alluvial terraces and escarpment along the Main Frontal Thrust. The 1255 and 1934 earthquake scarp follow the sharp contact between the deeply incised Siwalik sandstones folds in the background and inset terraces in the foreground. The rivercut cliff and 43 m-long trench in which the surface breaks of the past earthquakes have been discovered are visible to the right of the river course.
(Image: © Laurent Bollinger)

In 1255, before the modern study of earthquakes shed light on some of their inner workings, a major quake ruptured in the Himalayas, killing the king of Nepal. Scientists who have studied the historic quake had originally thought the temblor didn't rupture the Earth's surface, but a new study suggests it did.

These findings reveal that investigators may one day find more evidence of past earthquakes in the Himalayas, shedding light on the risks these disasters pose in one of the most densely populated earthquake-prone zones in the world.

The Himalayas, which are home to the highest mountain peaks in the world, are the result of the tectonic plate that hosts the Indian subcontinent slamming into the plate that holds the rest of Asia. As the plates continue to mash into each other, this titanic activity reshapes the face of the planet, and earthquakes result — a fact that places many at risk, given how the population density along the front of the Himalayas is similar to that of New York City.

Although massive earthquakes have rocked the region — quakes in 1897, 1905, 1934 and 1950 all had magnitudes between 7.8 and 8.9, each causing tremendous damage — oddly, none were known to have ruptured Earth's surface. Without evidence of past earthquakes visible at the surface, it becomes difficult to know when precisely they occurred or how powerful they might have been, limiting what researchers can say about what hazards people in the area might face in the future. [Video: What Does Earthquake 'Magnitude' Mean?]

Now scientists have uncovered evidence of not one but two great Himalayan quakes breaking the Earth's surface.

To discover these past ruptures, scientists looked at old aerial photos of the region and visited the most promising areas during four one-month-long field trips. The researchers discovered river deposits in Nepal that had shifted due to movements along the main seismic fault in the earth that currently marks the boundary between the Indian and Asian tectonic plates.

Using radiocarbon dating, the investigators found these shifts were apparently caused by great earthquakes in 1255 and 1934, showing that both quakes ruptured the surface. When it comes to the 1255 quake, historical records mentioned that many houses and temples in Nepal collapsed and that one-third of the population of the Kathmandu Valley was killed. "The incumbent king, Abhaya Malla, too, was killed due to the same earthquake," researcher Laurent Bollinger, a seismotectonician at France's Commissariat on Atomic Energy, told OurAmazingPlanet.

The findings suggest that great quakes recur in the region every few centuries.

Bollinger and his colleagues detailed their findings online yesterday (Dec. 16) in the journal Nature Geoscience.