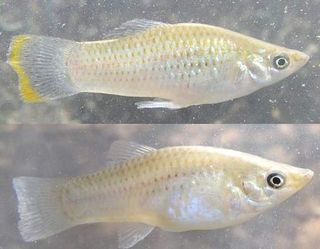 Female Mexican molly fish tend to go for big, colorful males, so what's a scrawny, drab guy to do? Scientists say he can flaunt bisexual behavior to bag a mate.

Among Mexican mollies (Poecilia mexicana), females are quite promiscuous but choosy, favoring flashy, large-bodied males that aggressively defend them and push smaller, duller males to the outskirts of the shoal. These less attractive and subordinate males hardly get a chance to compete, but they might be able to catch a female's eye if they engage in homosexual behavior, the research suggests.

For their experiments, scientists at the University of Frankfurt in Germany presented lab-raised female mollies with animations of virtual males, including scenes of less attractive males engaging in heterosexual and homosexual "genital nipping."

This fish version of foreplay is the most frequently observed sexual behavior for the species. Males regularly nip at the female genital opening before mating, but they are also sometimes observed nipping at other males' copulatory organs before trying to mate with them.

It is perhaps unsurprising that the females were more attracted to the smaller males after they saw them getting it on with other females. This seems consistent with a phenomenon known as female mate-choice copying, in which a male's attractiveness is bumped up if he has already been chosen by another female as a mate. [The Animal Sex Quiz]

But just as well, the researchers found that the females' attraction to the smaller males was significantly boosted when they saw the fish nipping at the genitals of other males. (The researchers said further experiments show the females could distinguish between heterosexual and homosexual situations.) Such behavior might represent a strategy for the subordinate males to exploit female mate-choice copying, the scientists said.

The team cited Woody Allen, who once said that "bisexuality immediately doubles your chances for a date on Saturday night," and in a different sense, this might be true for male mollies, too. The researchers said that female preferences for males engaging in homosexual behaviors could be an "intriguing mechanism" to explain why bisexual behavior evolved in some species.

Their research was published online today (Dec. 12) in the journal Biology Letters.