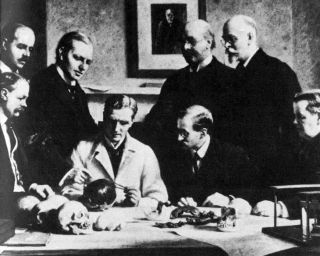 Who's the hoaxer? This portrait shows many of the major players in the Piltdown "discovery." In the back row: F. O. Barlow, G. Elliot Smith, Charles Dawson, Arthur Smith Woodward. In the front row: A. S. Underwood, Arthur Keith, W. P. Pycraft, and Sir Ray Lankester.
(Image: © John Cooke, 1915)

It's a detective story with a century-old crime: The forgery of a supposed "missing link" in human evolution that went undetected for decades.

Now, researchers are set on identifying the long-dead culprits responsible for the famous Piltdown Man hoax — involving forged bones said to belong to an early human — and teasing out their motives.

Writing in this week's issue of the journal Nature, Chris Stringer of the Natural History Museum, London, explains why he and his colleagues are still investigating a mystery that began 100 years ago.

"Personally, I am intrigued by the question of whether the hoax was driven by scientific ambition or by more jocular or vindictive motives," Stringer wrote. He and his colleagues plan to test the forged bones from the Piltdown case with modern methods, aiming to find out who most likely made them and why. [The 6 Greatest Hoaxes in History]

History of a hoax

The Piltdown Hoax is one of the most successful scientific frauds in history. In December 1912, British paleontologist Arthur Smith Woodward and amateur antiquarian Charles Dawson announced to the world that they'd found an amazing early human fossil in Piltdown, England. The curious specimen had a humanlike skull with an apelike jaw. Given the scientific name Eoanthropus dawsoni, it was more commonly called Piltdown Man.

Dawson and Woodward also reported that alongside Piltdown Man were a number of other stunning finds: stone tools, fossilized mammals and even an elephant bone. In 1916, Dawson claimed to have found more remains at a second site nearby.

According to Stringer's telling, some scientists did question the Piltdown Man bonanza discovery. They didn't immediately cry fraud, but suspected the fossil deposits had simply been mixed together over time, suggesting the ape jaw and humanlike skull weren't actually associated. [Rumor or Reality: The Creatures of Cryptozoology]

But it wasn't until the 1950s that Piltdown Man was exposed for the fraud it was. Chemical studies found the fossil to be less than 50,000 years old, not 1 million years as Dawson and Woodward claimed. Further testing showed the skull was likely from a modern human and the jaw probably from a modern orangutan.

The question is, who stained the bones to match each other and filed the teeth to appear more human?

That's the mystery Stringer and his colleagues hope to solve with radiocarbon dating, DNA testing and other molecular studies. If the researchers can pin down the origins of the bones used to make the faked fossils, Stringer wrote, they may be able to figure out which archaeologist on the project was responsible.

For example, if faked fossils from both the Piltdown site and Dawson's second site match up, the amateur probably did it, as he was the only discoverer of the second site, Stringer said. Dawson's motivation likely would have been scientific ambition and the desire to be accepted among the elite, Stringer added.

Though 12 suspects in total have been accused in the hoax, there are three particularly likely suspects, other than Dawson. Woodward is one, as is Woodward's assistant Martin Hinton, a zoologist who was found after his death in 1961 to possess a collection of stained and altered bones. A Jesuit priest, Teilhard de Chardin, who discovered a tooth at Piltdown, may also have been involved.

Even the famous have not escaped suspicion. British author Sir Arthur Conan Doyle, famous for his Sherlock Holmes mysteries, has been accused of being mixed up in the hoax, according to the BBC. Doyle lived near Piltdown and was an archaeological society member. He wrote about ancient apes in his novel "The Lost World" and could have been inspired to fool the scientific community because of their mockery of one of his great passions, spiritualism. (Doyle also believed in fairies.)

A century-old mystery may hardly seem fresh, but Stringer sees the case as an important milestone in the history of science. The Piltdown hoax likely made scientists less willing to accept real early hominin fossils such as Astralopithecus africanus, also known as "Lucy," Stringer wrote. But the hoax also shows that even if it takes time, science will eventually ferret out the truth, he said.

"Regardless of who was responsible, the Piltdown hoax is a stark reminder to scientists that if something seems too good to be true, then perhaps it is," Stringer wrote.