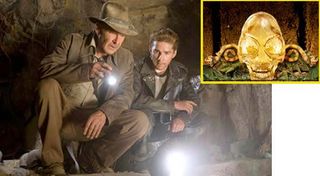 Harrison Ford and Shia LaBeouf in a scene from "Indiana Jones and the Kingdom of the Crystal Skull," out May 22. Also an illustration of the crystal skull.
(Image: © Paramount Pictures)

An archaeologist in Belize has filed a lawsuit against the makers of the film "Indiana Jones and the Kingdom of the Crystal Skull," alleging that the movie profits off references to an artifact illegally stolen from the country.

But the item in question, a real-life crystal skull, may not be a Belizean artifact carved by the ancient Maya people at all, but rather a hoax perpetrated by a self-styled 20th-century adventurer.

The story starts in the 1930s, when explorer Frederick A. Mitchell-Hedges claims to have found the skull somewhere in Central America. Or maybe it starts in the 1920s: That's when Mitchell-Hedges' daughter, Anna, now deceased, recalled finding the skull in the ancient Maya city of Lubaantún in Belize, though the exact date varied with the telling of the story.

The skull is smaller than the life-size ones seen in the Indiana Jones film (which are also, spoiler alert, alien in origin). It stands about 5 inches (12.7 centimeters) high, 7 inches tall (17.8 cm) and 5 inches (12.7 cm) wide. The skull is made of beautifully clear polished quartz, with a lower jaw that detaches.

Since it surfaced, the skull has been the subject of many legends. It's said to get its glassy sheen from the efforts of five generations of ancient polishers. It's also been attributed magical powers, from the ability to repel witchcraft to the ability to kill on command. [Full Coverage: The Myth of the Mayan Apocalypse]

"The Mitchell-Hedges crystal skull is not ancient; not even very old. It was probably made in Europe in the 20th century, and was not polished for five generations. It is not powerful, not scary and not at all what it purports to be," Walsh wrote in 2010 in Archaeology, the magazine of the Archaeological Institute of America.

Walsh's investigations of Frederick and Anna Mitchell-Hedges' claims about the skull's discovery also turned up many inconsistencies, she reported. It was likely purchased from an antiquities dealer in London in 1943, Walsh wrote.

The Maya did leave other amazing artistry behind, including a carved limestone monkey skull and elaborate painted murals.

The lawsuit of the crystal skull

The new lawsuit, however, takes the Mitchell-Hedges' claims as truth and argues that by removing this alleged artifact from Belize, Frederick and Anna broke the country's laws. Archaeologist Jaime Awe, the director of the Institute of Archaeology of Belize, filed the lawsuit on behalf of his country.

"The primary goal of the litigation is to: (a) preserve and return the artifact to the people of Belize; (b) to enforce the nation's rights to the artifact and the profits derived therefrom; and (c) to make known to the global community that while a relatively small, yet vibrant and growing nation, Belize will take whatever action necessary to preserve, and prevent the exploitation of its culture and cultural artifacts/landmarks," Awe's lawyer Adam Tracy wrote in an email to LiveScience.

"Indiana Jones and the Kingdom of the Crystal Skull" name-checks the skull, with Indy talking about how he and fellow archaeologist Harold Oxley were obsessed with the find. [10 Modern Tools for Indiana Jones]

"As the epicenter of Mayan culture, combined with the fact that the known crystal skulls were pilfered from the country, Belize is of the position that the physical artifacts, together with the nomenclature tied thereto, are properties of the people of the Belize," Tracy said.

As such, Awe is suing Paramount Pictures, Lucasfilms and Lucasfilms' new owner Disney for illegally profiting from the skull's likeness. He is also suing the Mitchell-Hedges family for the return of the skull, which is now in possession of Anna's widower, William Homann, in Indiana.

Unfortunately for believers in the Central American occult, not a single one of these skulls has been found to be authentic. The British Museum skull was likely made in the 1800s, according to the museum, based on tool marks left behind from the carving. Likewise, tests carried out on the Paris skull in 2007 and 2008 found it to be a late-1800s forgery. The Smithsonian skull, which happens to be the artifact that got anthropologist Jane MacLaren Walsh interested in investigating crystal skulls, was also carved with modern jewel-cutting equipment. [9 Famous Art Forgers]

To test the authenticity of the Mitchell-Hedges' skull, Walsh used high-powered microscopy, ultraviolet light, computerized tomography (CT) and scanning electron microscopy (SEM). A real artifact from Central America, created before the arrival of Christopher Columbus would have been carved by stone implements and abrasive sand, Walsh wrote. These tools leave marks that look rough under the microscope. But the Mitchell-Hedges' skull revealed microscopic cut marks that were unmistakably smooth and straight, the telltale signature of a metal tool augmented by diamond.

It remains to be seen whether the skull's veracity will play a role in the Indiana Jones lawsuit.

"The government of Belize does not believe the skull is fake," Tracy told LiveScience. "As such, I do not foresee any further testing of the artifact."