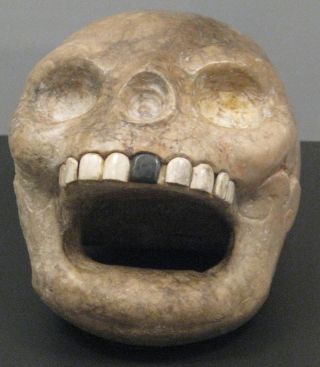 The Mayan skull is set to go on display at the Royal Ontario Museum.
(Image: © Owen Jarus, with permission)

A toothy Mayan skull, made of limestone and in the shape of a monkey head, is set to go on display at a Maya exhibition at the Royal Ontario Museum in Toronto Canada.

But unlike the famous crystal skulls, which are widely regarded as fake, this one is believed to be real.

The skull is roughly life-size and small enough that you can hold it in your hands. It has eight inlaid white teeth made of shell in two groups of four, with a black tooth made of iron pyrite in the middle. The mouth of the skull is wide open, and the eyes may have originally had shells in them.

"This was something that was given to the museum in the early 1970s," exhibition curator Justin Jennings told LiveScience.

A key trait that separates it from its fake crystal counterparts is that it's made of limestone, a material commonly used for art among the ancient Maya. Many artifacts from the Mayan city of Palenque were manufactured using it. Also monkeys were common motifs in Mayan art, their gods being sometimes drawn in the form of the animal.

Museum researchers believe that the skull would have been placed in a tomb sometime between A.D. 250 and 600, a time when the Maya civilization was flourishing. Jennings said that the skull may have been a symbolic representation of a piece of clothing worn while playing a ball game popular among the Maya.

The ball games were played on a narrow court using a hard rubber ball. Two opposing teams had to pass the ball by using their hips, elbows and knees (no hands were allowed). Evidence from Mayan art suggests that the losing team was sometimes sacrificed at the end.

To minimize injury, and make it easier to slide, the Mayans wore different types of clothing to protect themselves. The monkey skull may represent a hand guard, something worn around the wrists that would have made it possible for players to slide without injuring themselves. The cloth versions would not have been as artistic as the stone versions put in the tombs and may not have included a depiction of a monkey’s skull.

The exhibition, which features the skull along with more than 200 other artefacts, starts at the museum on Saturday, Nov. 19, and runs through April.