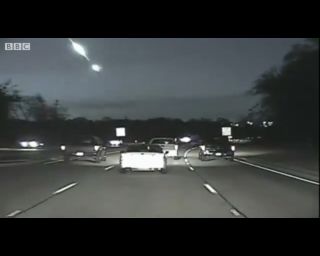 A brilliant fireball over Texas lights up the sky.
(Image: © Screengrab BBC Video)

A terrific fireball lit up the sky early Friday (Dec. 7) morning when a meteor entered the Earth's atmosphere over Texas. The meteor was captured in amateur video and by a NASA observatory as far away as New Mexico.

NASA confirmed that the meteor was not part of the Geminid meteor shower expected later this week, but was most likely a fragment from the asteroid belt.

"This morning at 6:43 AM Central Standard Time, eyewitnesses across Texas and adjacent states saw a very bright fireball streaking across the sky, moving roughly east to west," Bill Cooke, head of NASA's Meteoroid Environments Office at the Marshall Space Flight Center in Huntsville, Ala.,wrote in a statement. "It was also recorded by a NASA meteor camera in Mayhill, New Mexico some five hundred miles (805 kilometers) to the west, which is very unusual and testifies to the brightness of the event."

Meteors are rocky fragments of an asteroid or comet that enter the Earth's atmosphere. Upon entry, the friction caused by a meteor's high-speed impact with atmospheric particles heats the meteor, causing most of them to vaporize. Larger meteors can explode from the heat, creating massive fireballs. These bright explosions can be seen even in daylight and are occasionally loud enough to be heard up to 30 miles (48 km) away. Other fireballs have recently been spotted over Northern California, the United Kingdom and Ontario, Canada.

An amateur video of the amazing fireball can be viewed at the BBC here.

Preliminary reports from NASA suggest that there may be meteorites from this meteor on the ground north of Houston (a meteor becomes a meteorite when it impacts Earth); researchers are currently working to narrow the meteor's impact area. If pieces are located, confirming that parts of the space rock reached the ground, it will be counted as the 13th meteorite to fall on Texas since 1909.

Earlier this year, scientists working in Canada's western Arctic found an enormous crater that formed when a meteorite slammed into Earth roughly 130 million to 350 million years ago. In 2011, a rare Martian meteorite that was formed when an asteroid crashed into the surface of Mars fell to the desert in Morocco – pieces of that meteorite, named Tissint, have fetched high prices on the international market for meteorites.