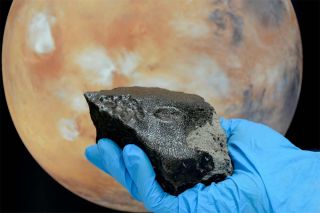 The rear of the stone from the Tissint Martian meteorite is almost completely covered with a glossy black fusion crust.
(Image: © Image © Natural History Museum Vienna)

On July 18, 2011, at 2 a.m. local time, nomads living in a desert valley in southern Morocco near the Algerian border reported seeing a fireball light up the sky followed by two sonic booms.

This was a truly rare event, not just the arrival of a Martian meteorite, but a meteorite fall that had witnesses.

Since this meteorite, later dubbed Tissint, landed, even the smallest fragments have been scooped up and distributed among collectors, museums and research institutions around the world. Researchers have begun examining them for clues about their home planet. And sales of the Mars rocks continue, with two pieces of Tissint going up for sale on Sunday (Oct. 14) during a public auction based in Manhattan.

But after Tissint touched down, nothing happened for a while. The summer heat in the desert is intense, and Ramadan, a holy month during which observant Muslims fast during the day, lasted through August. [Space Rocks! Photos of Meteorites for Sale]

The border between Morocco and Algeria is closed, and the Moroccan military permits only the nomads who graze their flocks into the area. These are the very people who power Morocco's meteorite business, which took off in the late 1990s, by scanning the desert ground around them.

"They have the time to do it," said Adam Aaronson, a meteorite dealer based in Rabat, the capital of Morocco. "If I were to do it myself, with my time, I could never sell them, the prices would be so high no one could pay for it."

Months after the fall, Aaronson got a call from one of his suppliers, who had a sample he wanted to send.

"I looked at it and immediately, my jaw dropped," Aaronson said. He wasn't certain it came from Mars, but he suspected it came from something valuable. On Nov. 9, 2011, he sent the mystery sample to Tony Irving, a meteoriticist at the University of Washington, to find out just what it was.

This is where the commercial meteorite industry crosses paths with academia. For a find to realize its value, meteorite dealers need to have the stone classified as a particular type of meteorite and given a name (based on location), or, if the exact location of the find is unknown, a regional designation and number. The Meteoritical Society, an international scientific organization, must formally accept these.

"Nobody will buy it from you if it doesn't have a name," Aaronson said. "I cannot ask $800 per gram for a Martian meteorite and say, 'Hey, trust me, it's Martian.'"

In Washington, Irving remembers receiving a collection of Ziploc bags, including the possible Mars' rock and other meteorites, by FedEx.

"One had only a tiny piece of this sort of sparkly rock," Irving said. He recognized the sparkling glass in the sample as maskelynite formed by the collision that ejected the rock, which became the meteorite, into space.

"After you see it, there is nothing else that is like [it]," Irving said. "In sunlight, it is like diamonds."

It was a strong sign this sample belonged to a Martian meteorite, which later tests confirmed.

Irving and Aaronson tried to keep a lid on the news of the discovery.

"People started suspecting there was something going on because of the prices we were paying," Aaronson said. Eventually, he and a supplier he was working with took the news public. "If you tell one person, pretty much 100 people know," he said.

In the beginning of January, The Meteoritical Society contacted Hasnaa Chennaoui Aoudjehane, a Moroccan meteoriticist at Hassan II University in Casablanca, to investigate the fall. [Gallery: One-of-a-Kind Places on Earth]

When she arrived in the remote part of Morocco where the meteorite had fallen, the site was nearly picked clean, and Aoudjehane found only small fragments that together weighed much less than 0.04 ounces (1 gram). However, she saw stones found by other meteorite hunters and the locations they were discovered.

"I have never seen anything so nice in my life, the fusion crust" — which forms around the meteorite as it travels through the atmosphere — "is so shiny, and very black."

She confirmed the fall, and on Jan. 17, 2012, The Meteoritical Society formally acknowledged the witnessed fall of a Martian meteorite named Tissint after a village 30 miles (48 kilometers) away from the fall site.

Aaronson had the opportunity to purchase what was, at the time, the largest piece of the Tissint. On Jan. 12, after a month of negotiation, he met the dealers in Morocco, where he came to an agreement with one of them. However, one of the sellers had broken the stone earlier because he became impatient when the two could not agree on the sale price. But, they said, he could still purchase the pieces.

Aaronson refused. "At that point, I was boiling out of anger, and told them I would not take it for free now!" he told LiveScience in an email.

The Natural History Museum of London later purchased the larger of the two pieces, and the smaller fragment goes up for auction Sunday in Manhattan. But now separated, these fragments lost the distinction of "main mass" — the largest known piece of a meteorite. The main mass is now a smaller 2.8-pound (1,282-gram) specimen.

Samples of the Tissint are now spread around the world, held in museum collections and at universities in Europe, North America and Japan. Three small pieces are part of private collection in Marrakesh.

Research on Tissint is well under way. The first analysis paper was published in the Oct. 12 issue of the journal Science, in which researchers report evidence suggesting that fluid, probably water, on Mars may have once weathered the rock that became the Tissint.