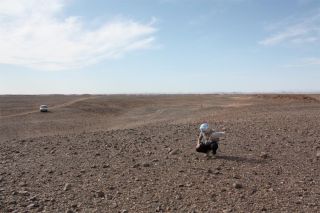 Though the Moroccan desert is rich with meteorites, many, including those from the Tissint Martian meteorite fall (south of Morocco), don't stay in the country for study but rather are sold in the booming meteorite market.
(Image: © Image courtesy of Chennaoui Aoudjehane)

Up until 1990, only five meteorites had been found in Morocco, but since then the rocks from space seem to have begun sprouting from this northwestern African country's desert. Now, records show that meteorite hunters have discovered 754 at specific sites in Morocco as well as thousands of others from uncertain locations.

The booming Moroccan meteorite business has turned up meteorites that would otherwise remain unknown to scientists and collectors, including rocks from the recent Martian meteorite fall, dubbed Tissint for the town near where it was discovered. But the success of the trade has created a dilemma for Hasnaa Chennaoui Aoudjehane, one of two meteroticists (meteorite scientists) in Morocco and the only one to study the Tissint. [Photos: Black Glass in Martian Meteorites]

All around but hard to get

On the one hand, Aoudjehane works in a place where meteorite finds are unusually abundant; on the other, the significant discoveries command high prices, and they are quickly ferried out of the country into collections abroad.

This makes it difficult for Aoudjehane to get access to samples for her research and leaves her country with little, if any, remnant of the meteorites that fell there.

"What I think we should have in Morocco, we should have a national collection," said Aoudjehane, of Hasan II University in Casablana, noting that Moroccan meteorites appear in museums around the world.

Stones from Tissint, for example, are held at museums and universities in Europe, North America and Japan. Tissint is still changing hands; two pieces are going on sale in New York City at a public auction on Sunday (Oct. 14).

Morocco is fertile ground for the meteorite business because of its deserts and the people who live in them. Meteorites land everywhere on Earth, but they last longer and are more easily found in deserts, either hot ones like Morocco's, or the cold desert of Antarctica, where water cannot weather them and vegetation does not hide them. (Antarctica has produced more than half of all meteorite discoveries.)

While The Meteoritical Society, an international scientific group, typically gives meteorites the name of a geographic feature near the site where they were found, meteorites from the region frequently turn up from unknown locations. These are named NWA for "Northwest Africa," and given a number. So far, 6,839 meteorites have this designation. Many of these, however, are believed to originate in Morocco.

An arrival from Mars

On July 18, 2010, at 2 a.m., nomadic herders in a southern Moroccan desert valley near the Algerian border saw a fireball light up the sky. Months later, the Martian stones made their way to dealers after nomads began to find them. In Morocco, these are the people who turn up the vast majority of meteorites.

Months after the fireball appeared, The Meteoritical Society got word of a possible Martian meteorite fall in this remote part of the Moroccan desert, and they asked Aoudjehane to investigate.

When she arrived in early January, she found hundreds of  people scouring the remote fall, which had been nearly picked clean. She found only tiny fragments of Tissint. [Space Rocks! Photos of Meteorites for Sale]

Martian meteorites are rare: About 60 Martian meteorites are known, and they are the only pieces of Mars on Earth. Not surprisingly, scientists like Aoudjehane are eager to analyze these rare rocks. They must, however, be judicious in their work. To conduct some analyses, for instance, scientists must subject a sample to high temperatures or dissolve it, and so destroying a little piece of the meteorite.

At least a few pieces of Tissint will remain on public display in Morocco. Aoudjehane said she was able to persuade the owner of a private museum in Marrakesh to purchase three samples of Tissint, weighing about 0.78 ounces (22 grams) total, but these are nice, complete stones intended for public display — "you can't break these pieces for research,"  she said.

Using her own money — she declined to say how much — Aoudjehane purchased 0.2 ounces (6 grams) of Tissint, some of which has since been consumed by analyses she conducted in Paris.

Aoudjehane led a study published in the Oct. 12 issue of the journal Science, the first paper published on Tissint.

In analyzing the Tissint, the teams found it contained an unusual amount of black glass, created in open spaces in the rock when something, probably an asteroid, hit Mars with enough force to eject Mars rocks into space.

The teams' analyses, using Tissint samples from institutions in Europe and Canada, indicate theglass holds evidence the rock had been weathered,most likely by water, before the impact.

Their analyses indicate that a fluid may have percolated down into open pockets in the rock, carrying minerals from the surface, possibly traces of Martian soil. In the open spaces in the rock, these formed weathering products before the impact created the glass, said Jean-Alix Barrat, a professor of geochemistry at the University of Brest.

The researchers are comparing the samples from Tissint with those from another Martian meteorite, one found in Antarctica's Elephant Moraine in 1980. Others have proposed that Martian soil was directly incorporated into the Antarctic meteorite, Barrat said.

Next, Aoudjehane hopes to take a close look at the unusually large bubbles that appear in the Tissint's black glass. However, she anticipates that getting samples to work on may be difficult.

In New York City on Sunday, two pieces of Tissint go up for auction, and Darryl Pitt, a meteorite dealer and Heritage Auctions' consultant for the event, hopes to see one specimen — a 0.75-pound (327 gram) piece broken from a larger stone now owned by the Natural History Museum of London — purchased by someone who would return it to Morocco or reunite it with the specimen in London.

An anonymous donor helped the museum purchase its piece of the Tissint, however, Aoudjehane has not so far been successful at getting samples of Mars meteorites donated to her.