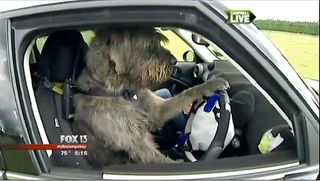 Dogs can learn new tricks, at least according to an animal shelter in New Zealand that has trained three of their canines to drive a car.

Porter, Ginny and Monte are all rescue dogs in the care of the Auckland Society for the Prevention of Cruelty to Animals. To prove that rescue dogs are just as smart and obedient as nurtured dogs, a trainer found a way to teach these mutts how to operate a specially outfitted Mini Countryman.

"Sometimes people think because they're getting an animal that's been abandoned that somehow it's a second-class animal," Christine Kalin, SPCA Auckland's CEO, told the New Zealand Herald. "The dogs have achieved amazing things in eight short weeks of training, which really shows with the right environment just how much potential all dogs from the SPCA have as family pets."

Local dog trainer Mark Vette selected three dogs from the shelter and started training them indoors on a modified cart with a steering wheel and separate controls for shifting, braking and accelerating. Proving that dogs — with their quick intelligence, eagerness to please and unquenchable taste for treats — are up to the task, after just seven weeks the trio graduated to training in an actual car on a closed outdoor track.

The dogs' rapid learning curve will come as no surprise to dog lovers: Research has found that the average dog is about as smart as a 2-year-old child. Additionally, brain scans have confirmed that man's best friend has an uncanny ability to understand and respond to human commands and other signals.

The trainers used an intuitive sequence of behaviors to train the dogs, which gradually learned to grasp the complex task. "In this case, we've got 10 behaviors we're all putting together, so each behavior is a trained behavior, and then you put them into a sequence," Vette said in the Herald article.

On Dec. 10, Porter, a 10-month-old Beardie Cross found abandoned on the streets, will demonstrate his driving skills on live national television, hopefully spurring a rise in doggie adoptions, Kalin said. "One of our hopes with this campaign is not only do we see an increase in adoption in the next month but on a long-term basis, too."