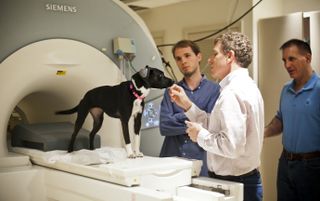 Fido's expressive face, including those longing puppy-dog eyes, may lead owners to wonder what exactly is going on in that doggy's head. Scientists decided to find out, using brain scans to explore the minds of our canine friends.

The researchers, who detailed their findings May 2 in the open-access journal PLoS ONE, were interested in understanding the human-dog relationship from the four-legged perspective.

"When we saw those first [brain] images, it was unlike anything else," said lead researcher Gregory Berns in a video interview posted online. "Nobody, as far as I know, had ever captured images of a dog's brain that wasn't sedated. This was [a] fully awake, unrestrained dog, here we have a picture for the first time ever of her brain," added Berns, who is director of the Emory University Center for Neuropolicy.

He added, "Now we can really begin to understand what dogs are thinking. We hope this opens a whole new door into canine cognition, social cognition of other species." [10 Barking Doggy Facts]

Berns realized dogs could be trained to sit still in a brain-scanning machine after hearing that a U.S. Navy dog had been a member of the SEAL team that killed Osama bin Laden. "I realized that if dogs can be trained to jump out of helicopters and airplanes, we could certainly train them to go into an fMRI to see what they're thinking," Berns said.

So he and his colleagues trained two dogs to walk into and stay completely still inside a functional magnetic resonance imaging (fMRI) scanner that looks like a tube: Callie, a 2-year-old feist, or southern squirrel-hunting dog; and McKenzie, a 3-year-old border collie.

In the experiment, the dogs were trained to respond to hand signals, with the left hand pointing down signaling the dog would receive a hot-dog treat and the other gesture (both hands pointing toward each other horizontally) meaning "no treat." When the dogs saw the treat signal, the caudate region of the brain showed activity, a region associated with rewards in humans. That same area didn't rev up when dogs saw the no-treat signal. [Video of dog experiment]

"These results indicate that dogs pay very close attention to human signals," Berns said. "And these signals may have a direct line to the dog’s reward system."

The researchers think the findings open the door for further studies of canine cognition that could answer questions about humans' deep connection with dogs, including how dogs represent human facial expressions in their minds and how they process human language.

With such an evolutionary history between man and man's best friend, the studies, the researchers point out, "may provide a unique mirror into the human mind," they write.

"The dog's brain represents something special about how humans and animals came together. It’s possible that dogs have even affected human evolution," Berns said.

In fact, research published in the August 2010 issue of the journal Current Anthropology suggests our love of these furry four-legged creatures may have deep roots in human evolution, even shaping how our ancestors developed language and other tools of civilization.