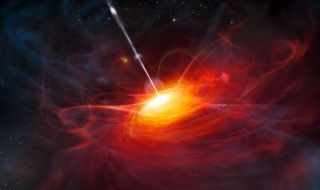 Light from the most distant quasar yet seen reveals details about the chemistry of the early universe.
(Image: © ESO/M. Kornmesser)

A cloud of hydrogen gas illuminated by the brightest object in the early universe is helping astronomers understand conditions a few hundred million years after the Big Bang. The chemical composition of the cloud indicates that, in this region of space at least, the first generation of stars were still very young at this stage in the universe's development.

"We're looking back to when the first stars were turning on, but also when the first chemicals were made," Robert Simcoe, of Massachusetts Institute of Technology, told SPACE.com.

A beacon through the fog

Earlier this year, astronomers discovered a bright radio source known as a quasar that lay over 13 billion light-years away. Because of the time it takes for light to travel, they were able to see quasar ULAS J1120+0641 as it was almost 13 billion years ago, when the universe was only 772 million years old.

Quasars are faraway galaxies that are illuminated by huge black holes in their centers gobbling up copious amounts of matter.

Although distant galaxies are too faint to study in detail, quasars shine trillions of times brighter than the sun, making them much more luminous than normal galaxies at the same distance. But to Simcoe and his team, what was interesting was not the quasar itself but the cloud of hydrogen gas that lay between it and Earth.

"You can imagine the quasar is like a beacon, peering through some fog," Simcoe said. "What we're trying to do is study the properties of the fog."

The fog, or hydrogen gas, is racing away from the Milky Way at almost the same speed as the quasar, which means that the two are close.

With a team of astronomers, Simcoe used a specially-built spectrograph instrument on the Magellan Telescope in Chile to study the chemistry of the cloud. They found an absence of the heavy elements that exist in the universe today. [Gallery: History & Structure of the Universe]

The early universe was composed of hydrogen and helium. It wasn't until the first stars ignited that heavier elements were created, and when these stars exploded in fiery deaths, space was seeded with the elements necessary to build planets. The lack of these elements in the early cloud of gas indicates that the stars around it have not yet had time to mix with their surroundings.

The astronomers also found that the gas had not yet been ionized, or stripped of electrons, like the hydrogen gas in space today.

"The only thing efficient enough to strip electrons away from protons is starlight, the light from hot stars," Simcoe said.

Stars heat up gas, making it transparent. The fact that the hydrogen remains opaque indicates that there are not many stars in that region of the universe.

But star formation in the early universe didn't start in a single area. The first generation of stars were scattered across space. So just because the region around the newly-discovered quasar isn't showing signs of stellar activity doesn't mean that no early stars existed at the time.

"In different spots in the universe, we expect star formation to turn on at different times," Simcoe said. "Basically what it means is that stars hadn't turned on yet in a global sense."

The research was published today (Dec. 5) in the online version of the journal Nature.

Depends on your perspective

Simcoe and his team can't tell whether the gas is part of a newly formed galaxy, or whether it makes up the diffuse material between collections of stars. The location of the hydrogen would give further insight into the early universe.

If the cloud is part of the protogalaxy that contains the quasar, it would consist of the ingredients for the first generation of stars. But the lack of heavy elements indicate that, though some stars may have already gone through their life cycle, the gas in the galaxy had not been thoroughly mixed.

However, in order for the gas to be part of the protogalaxy, the line of sight between Earth, the quasar, and the galaxy would have to be just right. According to Simcoe, the odds of that lineup are slim.

The gas is more likely part of the intergalactic material that floats between galaxies. Such gas would also provide broader clues about conditions in the universe. The lack of ionization would have wider implications than it would if found within a single galaxy, indicating that stars had not yet to begin to shine on a wider scale.

"The odds of seeing intergalactic gas is essentially 100 percent," Simcoe said, noting that such clouds would exist along all lines of sight.

By studying other comparable objects in the future, Simcoe hopes to answer the perspective question. If a similarly distant cloud of gas shows the same chemical signatures, then both are likely part of the intergalactic haze. But a different signature would indicate that one of the clouds lies inside a brand new galaxy.

"If we can find even a couple more things that people are searching hard for, then we should be able to settle that," Simcoe said.