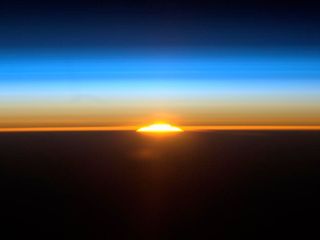 Nickel-eating bacteria may have worsened the mass die-off some 250 million years ago, scientists suggest. (Shown here, International Space Station astronaut Ron Garan captures one of the 16 sunrises they see each day, on Aug. 27, 2011.)
(Image: © NASA)

The study is the latest attempt to explain how most of the world's ocean species died off in just a few hundred thousand years at the end of the Permian era, about 250 million years ago. The researchers presented their findings Tuesday (Dec. 4) here at the annual meeting of the American Geophysical Union.

The study proposes that a series of steps caused the mass extinction, but that bacteria played a key role. First, massive volcanic activity in Siberia released nickel into the atmosphere, which somehow reached the ocean. As a result, populations of ocean-dwelling bacteria that use nickel in their metabolic pathway exploded, releasing huge amounts of methane into the atmosphere and depleting ocean oxygen levels as a byproduct of that metabolism. Because methane is a greenhouse gas, the catastrophic gas release trapped heat in the atmosphere and caused the mass extinction by making the climate uninhabitable.

But while the findings are intriguing, many of the steps in this process are speculative, said Anthony Cohen, a researcher at the Open University in the United Kingdom, who was not involved in the study. [Wipe Out: History's Most Mysterious Extinctions]

"There are a lot of assumptions you have to make," Cohen told LiveScience.

For instance, it's not clear how the huge nickel deposited in lava flows in Siberia could have made it into seawater around the globe, he said.

During "The Great Dying," up to 90 percent of the world's species perished. Though no one knows exactly how the mass die-off occurred, fossil records suggest gradual changes like ocean acidification and lessening atmospheric and oceanic oxygen first killed off species slowly, and cataclysmic volcanic eruptions or asteroid impacts then quickly wiped out the vast majority of life.

Another theory holds that vast troves of the greenhouse gas methane, which are normally trapped beneath the seafloor, were released from the ocean rapidly, causing apocalyptic levels of global warming.

But just what caused that massive methane release remained a mystery. Daniel Rothman, a researcher at the Massachusetts Institute of Technology, and his colleagues wondered whether ocean-dwelling bacteria that churn out methane were the culprits.

His team found through genetic analysis that bacteria called methanosarcina evolved the ability to break down nickel and make methane as part of its metabolism about 251 million years ago. The bacteria may have exploded in population, thereby releasing the ocean's vast methane reserves. And because the bacteria add an oxygen molecule to methane during metabolism, an exponential rise in methanosarcina may have catastrophically depleted ocean oxygen levels.

But in order for methanosarcina to rapidly reproduce, the population would need a huge source of nickel.

Around the same time, cataclysmic volcanic activity at the Siberian Traps in Norilsk, Russia, spewed up to 2.7 million square miles (7 million square kilometers) of nickel-rich lava.

"The worlds largest nickel deposits are in Siberia," Rothman said during the AGU conference. "They are there as a result of Siberian volcanism around 252 million years ago." [Watch Live: Latest News from 2012 AGU Meeting]

So the bonanza of nickel needed to spur a population explosion in methanosarcina likely came from the Siberian Traps. If that's the case, then catastrophic volcanoes and methane-making bacteria may have combined to cause the world's worst extinction event.

Though many of the study's proposed causes for the end Permian extinction are familiar, it does provide a new timeline of events, Cohen said.

"Quite a lot of the ideas have been around for a long time. It's just putting them together."