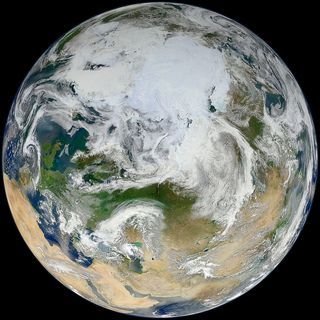 The 'blue marble' of earth gets a makeover in this view of the arctic as seen by the Suomi NPP satellite. Image released June 18, 2012.
(Image: © NASA/GSFC/Suomi NPP.)

The annual meeting of the American Geophysical Union, the largest meeting for geoscientists each year, is taking place this week (Dec. 3-7) in San Francisco, with lots of new findings in Earth science being announced.

LiveScience and its sister sites, SPACE.com and OurAmazingPlanet, are at the conference, covering the important, amazing and downright strange findings being presented. Below is a list of the discoveries we've covered so far — we'll be adding to it continually throughout the meeting.

You can also follow the latest news from the conference at our Twitter feeds (@LiveScience, @Spacedotcom and @OAPlanet) and at the hashtag #AGU12.

Drought May Have Killed Sumerian Language