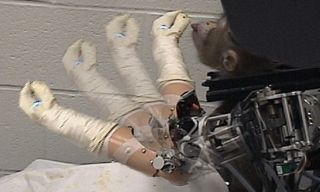 A monkey successfully manipulates a robotic arm controlled by its own brain to feed itself fruit.
(Image: © A. Schwartz.)

Scientists have shown in multiple studies that monkeys can manipulate robotic devices with their thoughts. Turns out the thoughts run deep.

A new study finds a monkey's brain structure adapts to treat a robotic arm as if it was a natural appendage.

The finding, announced Tuesday afternoon, bolsters the notion that the primate brain is highly adaptable, and it adds more knowledge to the effort to create useful prosthetic devices for humans.

The work is based on previous monkey studies at Duke University. Their efforts, and those of others, have shown that monkeys can use a robotic arm attached to their brains through a computer to accomplish simple tasks like serving themselves a treat.

In the Duke work, in 2003, the monkeys were taught to use a joystick to both position a cursor over a target on a video screen. Eventually, they were taught to move the cursor without using the joystick, instead just thinking about the task.

"After these experiments, a major question remained about how the animals' brains adapted to the transition between joystick and brain control," said Miguel Nicolelis, who led the research along with Mikhail Lebedev.

The scientists have since analayzed what happens functionally to the brain cells and the brain cell ensembles in multiple brain areas during this transition.

"And basically we were able to show clearly that a large percentage of the neurons become more 'entrained' -- that is, their firing becomes more correlated to the operation of the robot arm than to the animal's own arm."

While the animals were still able to use their own arms, some brain cells formerly used for that control shifted to control of the robotic arm, Nicolelis explained.

"Our hypothesis is that the adaptation of brain structures allows the expansion of capability to use an artificial appendage with no loss of function," he said.

The study is detailed in the May 11 issue of the Journal of Neuroscience.

Similar studies in humans have shown that we, too, are capable of manipulating external devices with just thoughts.