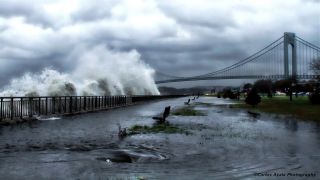 The wave heights are the largest in the region since record-keeping began in 1975, the National Weather Service said in a statement. However, records at the buoy near Breezy Point extend only to 2008, the NWS said.

Hurricane Sandy had already broken several other records. The storm surge pushed water to a record 13.88 feet (4.23 m) at Battery Park on the tip of Manhattan, beating the record of 10.02 feet (3.05 m) set by Hurricane Donna in 1960 in the same place.

The superstorm smashed pressure records as well, with the barometer hitting a record low 948 millibars in Atlantic City, N.J., and setting other record low pressures in New Jersey, Pennsylvania and Maryland. (A typical low-pressure system usually hits around 1,000 mb.)

Hurricane Sandy was also extremely large, even for a hurricane. At its peak, the storm's hurricane-force winds extended 175 miles (280 km) from its center, and tropical storm-force winds were felt 520 miles (835 km) away.

It is also the second-most energetic hurricane in modern records, second only to Hurricane Isabel, by one measure.