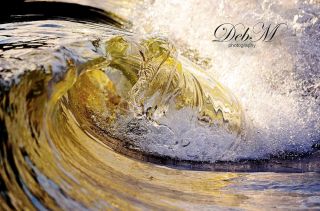 A wave doesn't have to be a monster to be breathtaking, as Australian photographer Deb Morris can attest. Morris' photographs of ocean wavelets capture gorgeous texture and color, from rainbow reflections to silvery froth.

Growing up in Bondi, Australia, near Sydney, Morris was immersed in surfing culture. She bought her first single-lens reflex (SLR) camera, an Olympus, at the age of 14 and spent the 1980s and 1990s snapping photographs of her coastal home. After decades in the corporate world, Morris found her job uprooted by the global financial crisis and decided to pick up photography full-time.

Now a resident of Angourie, a surfing mecca in New South Wales, Morris catches waves in her own way. LiveScience got in touch to talk photography, mini-waves and why she loves cities.

LiveScience: How did you get into photographing waves?

Morris: I was told that if I wanted to have a chance of success, I needed a "niche." This, at the time, did nothing but confuse me. By accident, in June 2010, while shooting some surfers I started to take some photos of the shore breakers and instantly knew I had found my niche. [Gallery: See Deb Morris' Amazing Wave Art]

LiveScience: What do you like most about photographing these tiny waves?

Morris: It's capturing those moments you just don't see with the naked eye that inspires me. There are so many aspects, shapes, colors, movement, etcetera, in the water.

LiveScience: Your waves come in gorgeous colors. How do you capture those hues?

Morris: Eighty-five percent of my photos are as-is. There is one thing I do with a Photoshop program, which brings them to life; however, on a rainy day, I sometimes have a play with color variations. I have never changed the shape of a wave, and don't believe there is need to.

LiveScience: Are there other subjects you particularly like photographing?

Morris: I like anything to do with motion, really, but totally left field of that would be urban photography. Cities just heighten all the senses and offer a variety of images to be captured.