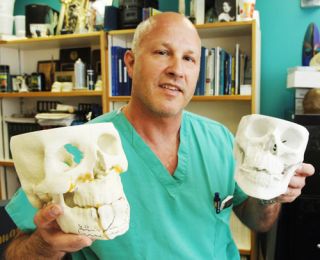 Surgeon Jon Wagner holds plastic casts of fractured jaws. Wagner builds the casts and uses them to plan a surgery before going into an operation.
(Image: © UNM Communication and Marketing)

It didn’t start as an engineering problem. It started as a patient problem. Jon Wagner, a head and neck surgeon at the University of New Mexico Hospital (UNMH), sees a lot of broken jaws. More than 400 of them a year roll through the doors of the only Level 1 Trauma Center in the state. When Wagner and the other trauma surgeons repair jaws they use heavy titanium plates, bending them to bridge the breaks with a combination of heavy tools and brute force. The plates are fixed to the jawbones with screws, usually inserted through the mouth. It is an invasive process and up to 20 percent of the patients have serious enough complications to require a follow-up surgery. The mechanics of the process bothered Wagner so much that he started tinkering with the plates in his garage, looking for a way to make them smaller and lighter, but still with some assurance they would stand up to the stresses his mostly young, mostly male patients would place on them. He was getting nowhere until he went across campus to talk to the mechanical engineers. Once Associate Professor of Mechanical Engineering Tariq Khraishi and his graduate student Scott Lovald understood what Wagner needed, the lights came on. It really was an engineering problem. Wagner was looking for smaller, better-designed plates he could use with confidence that there was good science behind them. While Lovald and Khraishi were not funded by the National Science Foundation, they ran simple experiments on a computer using a finite element modeling program. This program and many others like it are direct beneficiaries of NSF-funded research on the finite-element method. The research has been commercialized and is now the basis of a variety of software programs used by engineers. Lovald used his modeling work as part of his master's degree thesis and is now working on a doctorate. Meanwhile he and a friend, business graduate student Ryan Smith, formed Satyrne Biotechnologies as a way to market the plates. They've just received FDA approval for their new plate designs and have started to look for an approved facility to manufacture the plates on a trial basis. The new plates are significantly smaller and lighter than the one Wagner uses now in the operating room. Lovald and Wagner are preparing to test the plates at UNMH, and hope to persuade other hospitals in the area to try them as well. They are also busy writing papers about their collaboration, and hope to spread the word about their new solution to an old problem.