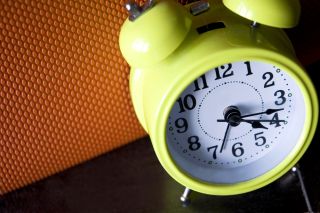 Independent of a watch or the sun's position in the sky, humans somehow can figure out how much time has ticked by, and a new study reveals how. The study suggests the brain has no master clock, but instead that every individual brain circuit can learn to tell time.

"People think when you need to time something, that there's some clock circuit in the brain that we look to," said study co-author Geoffrey Ghose, a University of Minnesota neuroscientist. "What our study indicates is it's actually very different. For every little task or every little action or decision you make, you could potentially develop timing representations."

A sense of time is fundamental to living creatures, Ghose told LiveScience.

"Often, you use external cues and events to figure out what time it is, like looking outside and seeing where the sun is or looking at a clock," Ghose said. "But you have a sense of time that's independent of all of that." [Can Animals Tell Time?]

To see how the brain keeps time, the researchers trained two rhesus monkeys to look back and forth in a very precise manner. The room had no external clues that could help the monkeys tell time.

"They basically had to be a metronome with their eyes moving back and forth," Ghose said.

Then, Ghose and his colleagues used electrodes implanted in the monkeys' brains to measure the electrical signals from neurons, or brain cells, in the parietal cortex, a region associated with eye movements.

Roughly 100 neurons were responsible for keeping the monkeys' eye movements on time, Ghose said. When the monkeys moved their eyes, the electrical signals spiked, then gradually decreased until it was time for the monkeys to look the other way. The team believes the slow decrease in electrical activity is the characteristic signal of time.

Interestingly, the team doesn't think these 100 neurons are the brain's master timekeeper. Instead, Ghose and his colleagues hypothesize that the brain can learn an internal sense of time for all tasks, whether it's meeting a friend for coffee or playing the piano.

"Every little circuit for every little action can develop clocklike actions," Ghose said.

Since the internal sense of time can be learned, those who are chronically late probably can't blame a faulty internal clock, he said.

"Presumably with enough training, if it was really important someone could develop a really good sense of time," he said. "The people who really don't have great senses of time have decided that it's not that important or rewarding."

The findings were published online Oct. 30 in the journal PLoS One.