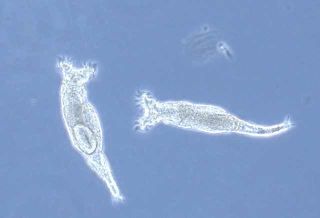 A pair of bdelloids probably don't get excited about each other as two humans in such close proximity might. Bdelloids don't need sex to reproduce.
(Image: © Marine Biological Laboratory)

Could you give up sex and survive?

Apparently microscopic, spineless critters named bdelloids (yes, bdelloids) seem to have done without for tens of millions of years.

The secret? An extraordinarily potent way to repair damaging mutations that can build up in DNA when sex is absent.

Asexuality is often thought to be a dead end in evolution, as only about 2,000 of the world's roughly 2 million named species are completely asexual, reproducing by simply splitting in two or some other method that doesn't rely on rolling in the hay.

Life without sex is conjectured to lead to extinction because of the way DNA naturally accumulates mutations. In animals that do have sex, healthy genes from one parent can serve as templates to help repair damaged genes from the other parent, for theoretically healthier offspring . Asexual species, lacking such a means of DNA repair, are thought to accrue harmful mutations over time that can help bring an end to a species.

However, bdelloids have proven quite prolific. In fact, these aquatic creatures have diversified into at least 400 species. The seemingly all-female bdelloids reproduce by laying eggs that hatch into more bdelloids without need for fertilization. (Bdelloid means "leechlike," due to how some inch along with their heads and tails.)

To see how bdelloids might have prospered without sex and its DNA repair mechanisms, scientists zapped them with gamma rays, which shatters DNA into many pieces.

Even at five times the levels of radiation that all other animals are known to endure, the bdelloids were able to continue reproducing.

These critters might have evolved such potent DNA repair mechanisms not to resist such intense levels of radiation — which are not naturally found on Earth — but to survive extreme dryness, which can damage DNA in a similar way. Bdelloids live in temporary pools and other ephemeral aquatic dwellings, and could get completely desiccated at any time in their lives.

How might this extraordinary ability to repair DNA have evolved? The researchers found evidence that bdelloids, like most animals, originally had two copies of each chromosome. At some point, however, the entire genome of the very first bdelloid got duplicated. This unusual event gave it four copies of each chromosome and thus of each gene. The bdelloids kept most of its extra genes over time, and "we believe they have kept most of their duplicate genes because they are serving as templates for DNA repair," Welch said.

Since damage to and repair of DNA are important factors in cancer, aging, inflammation and other human conditions, "being able to understand how animal cells can be so resistant to radiation may be of some interest in understanding how these conditions might be inhibited in human cells," researcher Matthew Meselson, a molecular geneticist at Harvard University, told LiveScience.

A better understanding of how bdelloids live without sex could shed light on how sex evolved in the first place, "which remains mysterious," Mark Welch added.

The scientists detailed their findings in two papers published online March 24 in the journal Proceedings of the National Academy of Sciences.