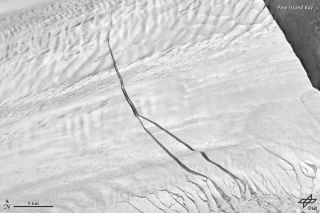 The 18-mile-long (29 kilometers) rift foretells the start of a giant iceberg, and researchers have been monitoring the glacier since the fissure was discovered in 2011. The giant fissure was stable for several months, but in May it spawned a second crack.

Ultimately, the berg that breaks off from the glacier could span 350 square miles (900 square km).

NASA scientists flying over Pine Island Glacier in a DC-8 airplane as part of their IceBridge mission first spotted the massive crack in the ice shelf on Oct. 14, 2011. The ice shelf extends into the Amundsen Sea, where ocean water melts it from below.

Pine Island Glacier birthed large icebergs in 2001 and 2007, but the 2011 NASA IceBridge survey marked the first time a major ice breakup was measured from the air.

This week NASA's IceBridge mission plans to return to Pine Island Glacier, weather permitting, to monitor the changes to the glacier and the process of the breakup. The scientists are halfway through their 2012 Antarctic campaign.