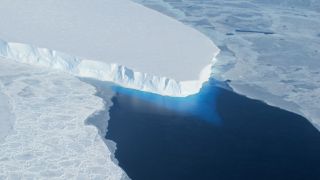 The calving front of Thwaites Ice Shelf looking at the ice below the water's surface.
(Image: © NASA / Jim Yungel.)

The rumble of a 40-year-old plane packed with scientists has returned to the Antarctic skies.

NASA's Operation IceBridge recently kicked off its fourth year with a survey of land and sea ice in West Antarctica, near the bay where a massive iceberg may soon break off Pine Island Glacier.

"We could witness the birth of an iceberg with our own eyes," IceBridge project scientist Michael Studinger told OurAmazingPlanet in an email interview. "How cool is that?"

The program's DC-8 research plane, loaded with remote-sensing equipment, is on a six-year mission to study ice at the South Pole during the Southern Hemisphere's spring and summer. IceBridge fills the gap between the defunct ICESat satellite and the planned ICESat-2, scheduled to launch in 2016. (A P-3B plane patrols the Greenland Ice Sheet and Arctic sea ice for IceBridge in Northern Hemisphere summers.)

The first science flight took off Oct.12 from the research plane's home base in Punta Arenas, Chile.

"A typical science flight is 11 hours long, and we routinely travel a distance that is longer that the trip from Los Angeles to New York and back," Studinger wrote on the IceBridge blog. "The long legs of the DC-8 allow us to reach scientific targets in Antarctica that have been, and still are, a challenge to survey."

During the first few weeks of a campaign, IceBridge typically concentrates on sea ice before it begins to melt as spring temperatures rise. However, the weather had other ideas this year.

"The forecast for all sea ice science targets was hopeless," Studinger said in a NASA statement. "We decided to take advantage of the unusually good conditions over the Thwaites Glacier area."

Thwaites Glacier is one of the largest glaciers in West Antarctica and has been the subject of repeated missions over several years. Computer models have a hard time pinpointing what the Antarctic ice sheet and surrounding sea ice might do as the climate changes. Having more data to work with would make these models more useful.