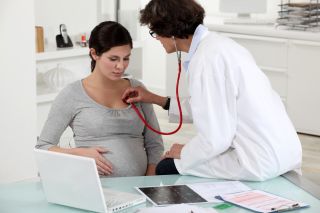 A Republican congressman's claim that advances in science and technology mean pregnancy no longer threatens a woman's life and health doesn't stand up to scientific scrutiny.

In fact, conditions ranging from ectopic pregnancy, in which an embryo implants outside the uterus, to preeclampsia, which causes skyrocketing blood pressure and can lead to strokes and seizures, can and do threaten the lives of pregnant women. Preeclampsia and gestational high blood pressure occur in about 6 percent to 8 percent of U.S. pregnancies, according to the National Institutes of Health (NIH).

While those conditions are common, many individual cases have complications as well, said Alison Cahill, an assistant professor of obstetrics and gynecology at the Washington University School of Medicine in St. Louis.

"As a high-risk obstetrician, I see many women, in addition to those things, who have pre-existing conditions, so other illness or medical problems that then make their pregnancy high-risk," Cahill told LiveScience.

Rep. Joe Walsh (R-Ill.) told reporters Thursday night that he is anti-abortion without exception for rape, incest, or life or health of the mother, Radio 720 WGN in Chicago reported. He defended his stance on the life-and-health exceptions by saying, "This is an issue that opponents of [pro-] life throw out there to make us look unreasonable. There is no such exception as life of the mother and as far as health of the mother, same thing, with advances in science and technology, health of the mother has become a tool for abortions for any time under any reason."

Statistics tell a different story. In fact, though pregnancy-related deaths fell dramatically in the 20th century, they have been on the rise since 1987, according to the Centers for Disease Control and Prevention. There were 7.2 deaths per 100,000 live births in 1987. By 2003, that number had risen to 14.5 deaths per 100,000 live births. [6 Politicians Who Got the Science Wrong]

Better recordkeeping may account for some of the rise, according to the CDC, but an increase in chronic conditions such as hypertension, diabetes and obesity may also explain the increased risk of complications.

And despite Walsh's comments, pregnancy complications can't always be solved by modern technology. Ectopic pregnancy, for example, affects 19.7 out of every 1,000 North American pregnancies, according to a paper published in February 2000 in the journal American Family Physician. In these cases, embryos almost always implant in the fallopian tubes, the connection between the ovaries and the uterus. The fallopian tubes aren't capable of supporting a pregnancy; a growing embryo will rupture them, which can cause uncontrollable bleeding. There is no technology available to save these pregnancies.

Some ectopic pregnancies miscarry on their own, but most require a surgical or medical abortion to prevent those life-threatening ruptures.

Preeclampsia is another pregnancy condition that stumps modern medicine. The condition usually develops after 20 weeks of gestation for reasons not fully understood. The only treatment is delivery.

Embolism (when a clot blocks a blood vessel), hemorrhage and the exacerbation of pre-existing conditions such as diabetes or heart disease are the top causes of pregnancy-related death, according to a 2003 paper published in the journal Obstetrics & Gynecology. That study also found that pregnancy complications are not equal-opportunity killers. Black women were nearly four times as likely as white women to die because of pregnancy. Teens and women in their late 30s or older were also at higher risk of pregnancy-related deaths.

Pregnancy can also turn chronic conditions into life-threatening ones. Cardiovascular disorders such as pulmonary hypertension and vessel abnormalities can be worsened by pregnancy, Cahill said. Pre-existing liver and kidney diseases can also threaten expectant mothers' lives.

"I wish that modern science and modern medicine cured all of those things, but unfrotuatnely that's just simply not true," Cahill said.

Walsh joins several other politicians this election cycle in glossing over scientific fact in pursuit of an ideological point. In August, Rep. Todd Akin (R-Mo.) claimed that the female body "has ways to try to shut that whole thing down" in regards to pregnancy from rape. (Akin walked back his comments after a public outcry.) And earlier this month, Rep. Paul Broun (R-Ga.), a member of the House Committee on Science, Space and Technology, said that he believes the Earth is 9,000 years old, calling evolution, the Big Bang Theory and embryology "lies straight from the pit of hell."

Editor's Note: This article was updated on Tuesday, Oct. 23 to correct Alison Cahill's title from "professor" to "assistant professor."