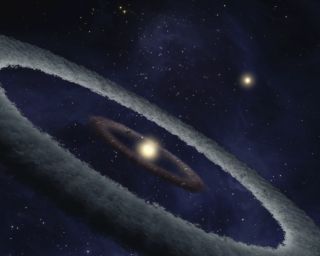 U.S. House Rep. Paul Broun, a Georgia Republican, doesn't believe in evolution, the Big Bang theory, or the teachings of embryology. In fact, in a Sept. 27 talk at Liberty Baptist Church in Hartwell, Ga., the member of the House Committee on Science, Space and Technology, who is also a medical doctor, called those areas of science "lies straight from the pit of hell."

But Broun also advanced his own theory of life on Earth.

"You see, there are a lot of scientific data that I've found out as a scientist that actually show that this is really a young Earth," he said. "I don't believe that the Earth's but about 9,000 years old. I believe it was created in six days as we know them. That's what the Bible says." [7 Theories on the Origin of Life]

Broun's creationist viewpoint stands in opposition to what scientific research reveals about the age of the planet. In fact, Earth formed 4.54 billion years ago — and humanity is rather lucky not to be seeing the planet on its 9,000th birthday. Earth was formed by the colliding and coming together of massive space objects called planetesimals, said Richard Carlson, a geochemist at the Carnegie Institution who has studied some of Earth's oldest rocks. The force of the impacts would have melted rock, leaving Earth molten for hundreds of thousands of years, Carlson told LiveScience.

"Nine thousand years after the last giant impact — there likely were several big impacts during the growth of the planet — the surface of Earth, to a considerable depth, likely was molten rock," he said.

Broun is far from the only believer in a literal, or Biblical, creation. According to a Gallup poll conducted in June, 46 percent of Americans believe God created humans in their present form within the last 10,000 years, a creationist belief. Only 15 percent said they believed in evolution without God's hand, while 32 percent said they believed in evolution guided by God.

That survey did not ask adults how old they believed Earth to be, but estimates based on literal interpretation of the Bible normally range from 6,000 to 8,000 years. (It's not clear why Broun believes in a 9,000-year-old Earth.)

The most popular 6,000-year-old figure comes from James Ussher, a 16th-century Irish clergyman. Ussher, whose position as Archbishop of Armagh made him head of the church in Ireland, published two works in the 1650s using genealogies from the Bible to date the creation of the world to Oct. 23, 4004 B.C. [Religious Mysteries: 8 Alleged Relics of Jesus]

Other estimates differ based on the use of different Bible translations and whether biblical scholars take the Bible's six-day creation period literally or assume the "days" to be longer periods of time.

What the science says

Scientists, on the other hand, have reached a surprisingly precise answer as to the age when Earth and the rest of the solar system began to solidify: between 4.567 and 4.568 billion years — the equivalent of knowing a person's birthday within two days, Carlson said.

This age range is calculated using isotopes, or variants of chemical elements. For the purposes of dating the solar system, researchers use lead and uranium isotopes. They measure the ratios of different types of isotopes from Earth and from meteorites. Because these objects all formed from the same pool of cosmic dust and gas during the birth of the solar system, the measurements enable researchers to determine how long ago the objects separated from that common pool.

As it turns out, these numbers mesh quite nicely with the ages of the oldest rocks known on Earth, which would have formed after the planet stabilized and cooled. The best estimate for the age of the oldest rocks on Earth, found near Hudson Bay in Quebec, is 4.4 billion years, according to Carlson. (The date is somewhat controversial, with some scientists believing 3.8 billion years is a closer date for those rocks.) Meanwhile, the oldest mineral grains found on Earth, zircons from Western Australia, date back 4.36 billion years.

The cooling and solidifying of the planet likely happened quickly on a geologic time scale, on the order of hundreds of thousands to a million years, Carlson said. But Adam and Eve wouldn't have found Earth hospitable for a very long time. Even at 2.5 billion years of age, the planet had a flip-flopping atmosphere that periodically looked like something you'd see on one of Saturn's moons today.

The first evidence for life on Earth may be Australian stromatolites, fossilized bacterial mats that date back 3.5 billion years. More certain fossils peg life's arrival to 2.7 billion years ago. Modern humans, by contrast, didn't show up until 200,000 years ago.