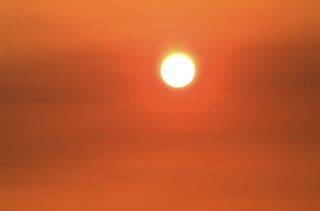 The research, published online March 18 in the journal Nature Geoscience, found that 2.5 billion years ago, Earth's atmosphere periodically flipped from a hydrocarbon-free, and thus haze-free, state to one in which the skies were full of an organic, hydrocarbon-rich fog created by microbes. This hazy atmosphere is much like that seen today on one of Saturn's moons.

"If you want to see an example of what ancient Earth might have been like, you can take a look at Titan," said study researcher Aubrey Zerkle, a biogeochemist at Newcastle University in the United Kingdom. Titan has a dense, orange-haze atmosphere rich in the hydrocarbon methane.

Simulations of early Earth had suggested that the planet was warmed by a layer of organic haze, but no one had ever found solid evidence of this haze in the rock record. Zerkle and her colleagues conducted a geochemical analysis of marine sediments from that time and found the first physical evidence for such an atmosphere: methane in different layers of sediment, the result of methane-eating microbes capturing the hydrocarbon from the atmosphere.

But unexpectedly, this haze was not a constant feature. Rather, early Earth's atmosphere "flip-flopped" between hazy and clear. The change was driven by the metabolisms of methane-producing microbes in the ocean, Zerkle told LiveScience. [Extreme Life on Earth: 8 Bizarre Creatures]

"Something is causing those organisms to go crazy one moment and slow down the next," Zerkle said. The researchers aren't sure what drove the change in microbial metabolism, but it may have been influxes of nutrients into the ocean environment.

Zerkle and her colleagues analyzed sediments that had been deposited between 2.65 billion and 2.5 billion years ago near what is today South Africa. The flip-flopping atmosphere of early Earth stabilized into something more like what we have today about 100 million years after those sediments were laid down, when photosynthesizing cyanobacteria started pumping oxygen into the atmosphere.

"What is most surprising about this study is that our data seems to indicate the atmospheric events were discrete in nature, flip-flopping between one stable state into another," study researcher James Farquhar of the University of Maryland said in a statement. "This type of response is not all that different from the way scientists think climate operates today, and reminds us how delicate the balance between states can be."