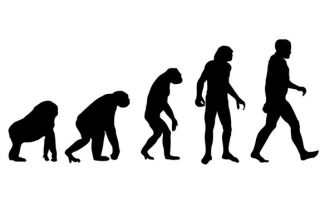 American who say humans evolved over millions of years into our current form, without intervention from God, are in the minority.
(Image: © imageZebra | Shutterstock)

The percentage of Americans who believe God created humans in their present form within the last 10,000 years is about the same as it was 30 years ago, a new survey indicates.

Today, 46 percent of Americans accept this creationist explanation for human existence, a negligible change from the 44 percent who said they agreed with it in 1982, according to Gallup polls.

In the most recent poll, conducted by phone in May, 15 percent of Americans fell on the other end of the spectrum, saying they believed God played no part in human evolution, a process that had taken millions of years. Nearly all of the rest of the respondents, 32 percent, choose the third option, saying they believed humans had evolved, but that God had guided the process, a belief called "theistic evolution."

How do you believe people came into existence?

Beginning in 1982, Gallup has asked Americans which of these three explanations of human origins they believe. With respect to the original numbers, a slight shift showed up this year with regard to those who agreed that humans evolved without God, which was above the 30-year average, and the theistic evolution explanation, which was below the average.

Not surprisingly, the poll found that Americans who attend church regularly, particularly those who attended on a weekly basis, were much more likely to hold creationist views.

Republicans are also the most strongly creationist, but this belief was also the most prevalent among Independents and Democrats compared with other beliefs held by the two groups.

The USA Today/Gallup phone survey was conducted using a random sample of 1,012 adults, living in all 50 states and the District of Columbia.