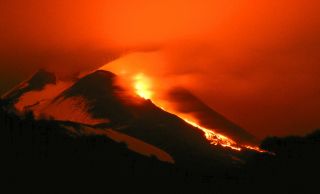 Anyone who has popped a Champagne cork or plopped a Mentos into a Diet Coke knows the power of bubbles.

The observation suggests in most basalt-fed volcanoes, gas escapes rapidly enough to outpace bubble growth, resulting in smaller eruptions, the study authors conclude. When the top comes off the bottle, the liquid inside is flat, so to speak. But when a basaltic magma's bubbles don't collapse before reaching the surface, the result can be violent volcanic eruptions, the study confirms.

"The important aspect is the rate at which bubbles grow compared to the rate at which gas is lost through connections between the bubbles," said Don Baker, lead study author and a geochemist at McGill University in Montreal. "It really looks like it's the first few seconds of bubble growth that determined the intensity of the eruption," Baker told OurAmazingPlanet.

The researchers watched molten rock bubble in real-time by zapping water-bearing basalt with lasers at the Swiss Light Source facility in Villigen, Switzerland. As the basalt simmered at nearly 2,200 degrees Fahrenheit (1,200 degrees Celsius), they imaged the bubble growth and foaming with three-dimensional X-ray microtomography (CT scans). With these images, the researchers measured the number and size of bubbles, investigated the geometry of the connections between bubbles, and calculated how quickly gas flowed out of the sample.

The researchers tested basalt in hopes of finding the tipping point between the rock's beautiful, but relatively safe fire fountains, and destructive, rare Plinian-style eruptions. Massive volcanic eruptions are designated Plinian-style, after the Roman author who died in the eruption of Mount Vesuvius. The 2010 eruption of Eyjafjallajökull, Iceland — a basalt volcano — was Plinian-style, as was Mount Etna's blast in 122 B.C.

The findings could someday help volcanologists to predict hazardous eruptions. Though other rock types are usually responsible for big volcanic blowouts, the bubble process is still the same, Baker said. "We only studied a basaltic composition, but because the bubble growth mechanism is the same in all types of volcanic rocks, these results should be applicable to other systems," he said.

However, scientists are far from understanding the processes that control gases in magma chambers, let alone actually monitoring them underground. "We know this is just a small step, but we do think it's an important step in helping understand what's going on underneath volcanoes," Baker said.

The results are detailed in today's (Oct. 16) issue of the journal Nature Communications.