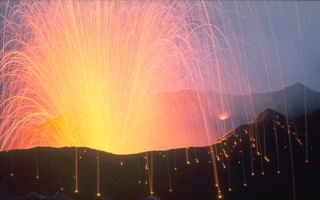 Red-hot magma spews from Italy's Stromboli Volcano every 5 to 20 minutes thanks to tiny bubbles of magma that build up and pop a cork inside the volcano, according to a new study that forces some rethinking about how the historically eruptive mountain works.

Stromboli fires when a sponge-like plug, similar to a cork in a champagne bottle, fractures every few minutes due to pressure created by the gas bubbles. This new idea challenges an old theory about what causes Stromboli to erupt, and may help scientists predict how often other volcanoes like it will blow.

The volcano lent its name to a particular type of eruption, called Strombolian eruptions, which are mild eruptions spaced at regular intervals.

Stromboli has been erupting so frequently for thousands of years that scientists thought they had a handle on the process. The thinking was that swimming-pool-sized bubbles would travel through several hundred feet of molten magma before popping at the surface. There's only one problem: These giant magma bubbles would have to be larger than physically possible, said study team member Jenny Suckale, an MIT graduate student. This size problem was discovered with computer models that simulated the inner portions of the volcano.

Rethinking how Stromboli works could shed light on how similar volcanoes, such as Mount Erebus in Antarctica, erupt. Erebus has been continuously active since the 1970s.

Stromboli, Erebus and other volcanoes like them are a special breed. While some volcanoes are driven by gas, others are driven by rising magma or interactions with water. Despite the differences in their inner workings, Suckale said that figuring out Stromboli would be "an important step forward for volcanology," because scientists don't really know the details of how most volcanoes function.

Understanding the processes that cause volcanic eruptions can help scientists better predict how often and how violently a volcano will erupt. Although scientists have a general idea of how these processes work — the melting of magma below the volcano causes liquid magma and gases to force their way to Earth's surface — eruptions happen so rarely, and often with little warning, that it can be difficult to study them in detail.

The study is detailed in the July 20 edition of The Journal of Geophysical Research.