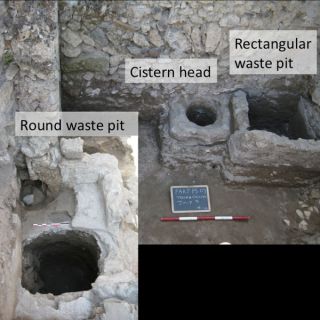 A composite photo shows the location of two trash pits in close proximity to a cistern that held drinking and washing water in a home in Pompeii. Residents' casual attitude toward trash explains why tombs were filled with household garbage, an archaeologist says.
(Image: © Pompeii Archaeological Research Project: Porta Stabia)

The tombs of Pompeii, the Roman city buried by a volcanic eruption in A.D. 79, had a litter problem. Animal bones, charcoal, broken pottery and architectural material, such as bricks, were found piled inside and outside the tombs where the city's dead were laid to rest.

To explain the presence of so much garbage alongside the dead, archaeologists have theorized that 15 years before the eruption of Mount Vesuvius, an earthquake left Pompeii in disrepair.

However, this theory is unlikely, according to an archaeologist who says the citizens of Pompeii may have just been messy, at least by modern, Western standards. [Images from Pompeii]

"We tend to assume things like that are universal, but attitudes toward sanitation are very culturally defined, and it looks like in Pompeii attitudes were very different than ours," said Allison Emmerson, a graduate student studying Roman archaeology in the classics department of the University of Cincinnati.

Archaeological evidence from the last 15 years indicates that the city likely did not fall into ruin after the earthquake in A.D. 62; rather than flee, citizens appear to have rebuilt, reconstructing public spaces and elite houses. When the eruption buried the city, new tombs were still being built and the city appeared prosperous, according to Emmerson.

"It just didn’t make sense that trash would mean the tombs weren't being used," she said.

In fact, the tombs weren't unique; excavators have found the same sort of household garbage in the city streets, along the walls of the city, even on the floors of homes. When Emmerson excavated a room in a house that appears to have also served as a restaurant, she found a cistern for storing water between two garbage pits packed with broken pottery and food waste, such as animal bones, grape seeds and olive pits.

No evidence has been found for a system for handling garbage or for dedicated dumps.

"The closest thing that has been found is a giant heap of garbage outside the city walls," she said.

The residents of Pompeii also appear not to have shared our conventions on burial. As Romans, they were primarily concerned with being remembered after death, so they sought tombs in high-traffic areas. Since Roman law and custom forbid cemeteries inside the city, the tombs ringed the city walls, and clustered at its gates.

The walls of the tombs also served as the billboards of the day, bearing official graffiti announcing gladiator fights, and political advertisements for candidates for office in red paint. Other graffiti was of the "bathroom" variety, Emmerson said. These included more obscene versions of "I had a girl here," and messages back and forth scratched into the plaster of the tombs.

Emmerson is scheduled to present her work, which examines how Pompeii's tombs reflect the culture at the time, on Saturday (Jan. 7) at the annual meeting of the Archaeological Institute of America in Philadelphia.