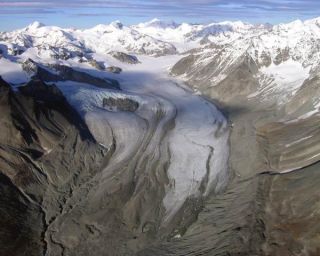 Alaska's Gulkana Glacier, as it appeared in 2003. Satellite data show that glaciers and ice sheets have had increased melting rates in the last decade.
(Image: © Rod March/USGS.)

A computer model of carbon dioxide in ice cracks has two MIT researchers speculating that the greenhouse gas could structurally weaken glaciers, which are already under pressure from global warming.

Materials scientist Markus Buehler, a professor at MIT, studies the mechanical properties of fracturing in everything from spider silk to bones. He works on a nano-sized scale, looking at the bonds between molecules and atoms. Even an iceberg the size of Manhattan starts with a single broken bond, so Buehler and postdoctoral scholar Zhao Qin decided to investigate what happens when ice fractures. They were particularly interested in how carbon dioxide gas, which contributes to global warming, might affect fracturing in ice.

The gas molecules seemed drawn to the tip of the crack; to get there, they flipped along the surface like zombie gymnasts, leaving broken hydrogen bonds in their wake. The carbon dioxide clustered at the tip of the crack constantly attacked the water molecules located there as well, making it easier for the fracture to widen and grow.

In the real world

But it's a long way from a computer at MIT to an ice sheet, and, in the real world, glaciers aren't pure ice. They are a dirty, messy mix of dust, volcanic ash and whatever else had the misfortune of getting trapped in the ice — plus a sprinkling of rocks and meteorites. Glacier ice also constantly melts and refreezes, so no glacier has uniform mechanical properties throughout its stream.

"The strength of ice might be really different than what a laboratory measurement might tell us, because of all of these impurities coming into play," said Jeremy Bassis, a glaciologist at the University of Michigan in Ann Arbor, who wasn't involved with the MIT study.

Bassis also pointed out that glaciologists already know the fracture toughness of glacial ice, which could have been plugged into the computer simulation. "I'm a little disappointed that they don't look at observations of [the] fracture toughness of glacial ice," Bassis told OurAmazingPlanet. "I think it's interesting that they have this idea that you're changing the fracture strength, but my gut feeling is that is not what's actually going on. There is a lot of evidence that ice-ocean interaction is causing fractures where you see icebergs calving."

Buehler and Qin hope their results will spark further research into the effects of carbon dioxide on fracturing in glaciers and ice sheets, they said in a statement.

"If ice caps and glaciers were to continue to crack and break into pieces, [the amount of] their surface area that is exposed to air would be significantly increased, which could lead to accelerated melting and much-reduced coverage area on the Earth," Buehler said in a statement. "The consequences of these changes remain to be explored by the experts, but they might contribute to changes of the global climate," he said.

The findings were detailed in the Oct. 11 issue of the Journal of Physics D: Applied Physics.