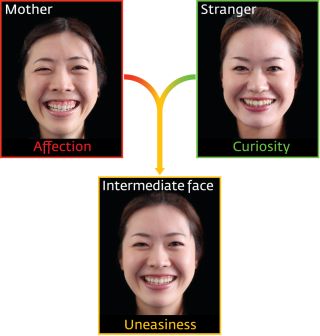 Infants spend less time looking at a morphed image of the face of their mother than at one morphed with that of a stranger's face, possibly due to the 'uncanny valley' effect.
(Image: © Yoshi-Taka Matsuda, Riken Brain Science Institute)

Something "uncanny" seems familiar yet alien at the same time, often stirring a feeling of fear or revulsion. For example, we tend to feel creeped out around lifelike robots and animatronics that fall in the "uncanny valley," the divide between the fully human and the not-exactly-human. New research suggests this type of reaction might start in infancy.

Scientists in Japan studied how 57 babies reacted to pictures of faces. The infants were shown real photographs — either of the child's mother or a complete stranger — and natural-looking morphed images that combined either the mother's face and a stranger's face or two strangers' faces.

In previous studies, researchers showed that infants tend to stare at pictures of both mothers and strangers for about the same amount of time, but measures of their neural responses suggest they process the two faces differently.

Using an eye-tracking system, the researchers found the infants looked at the photos of their mothers longer than the "half-mother" hybrid faces. This effect strengthened with the infant's age, the team said. There was no significant difference in the infants' preference between the real and morphed photos of strangers.

Matsuda said it is possible that the infants felt disinterest looking at an uncanny "half-mother" picture, because the face was not totally new, like a stranger's, and did not rouse the affection associated with a mother's face.

"However, most adults also reported uneasiness related to morphed faces of their mothers, so we interpreted that infants might be having the same reaction," Matsuda explained.

In their study, published in the journal Biology Letters, the researchers said their findings show that there is another type of the uncanny valley between the face of the mother and the face of a stranger for infants, and this phenomenon appears during development. The team plans to repeat the experiments with fathers' faces.