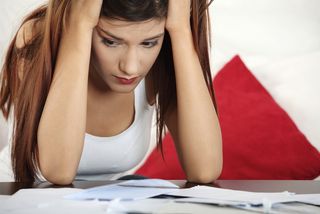 The study is one of the first to examine the body's response to negative media, something we're all exposed to on nearly a daily basis. As it turns out, a perusal of nasty headlines does not automatically trigger the body's stress response, but women who have read negative news show heightened anxiety in response to later stress.

"Given that 'there is no news like bad news,' it is essential to understand the societal reactions to negative information that is perpetually transmitted and passively received via popular mediums," the study researchers wrote today (Oct. 10) in the journal PLoS ONE.

The University of Montreal researchers asked 56 men and women to read 24 news excerpts, each consisting of a headline and a short summary. Half of the participants saw neutral news, while the rest got depressing information. After reading the news segments, the participants each participated in a stressful mock job interview followed by a mental math test. Throughout the experiment, researchers measured the levels of the stress hormone cortisol present in the participants' saliva.

The next day, the researchers called the participants and asked them to recall as many of the news headlines from the day before as possible. Women and men remembered the neutral stories at about the same rate, but women were about twice as likely as men to remember the negative headlines. [7 Thoughts That Are Bad For You]

It's unclear why men don't show these responses, the researchers wrote, though men did react to the stressful task more strongly than women in general, which may have masked the effects of the type of news they read.

Because many people read the news every day, it's possible that the participants were inured to the initial stress of bad news, the researchers added. However, the chronic stress of repeated exposure to upsetting headlines might prime women, more so than men, to react more strongly to single stressful experiences. Women may also ruminate on bad news more, the researchers suggested, explaining why they remembered negative headlines better than men the next day.

"While our results are specific to women," the researchers wrote, "future studies should investigate various populations as function[s] of, for instance, gender-based, generational, and other socio-cultural factors that modulate individual differences in propensities towards informing themselves and coping with negative news."