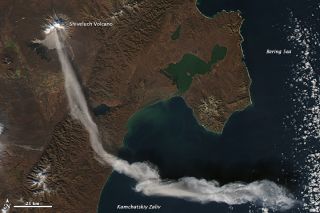 NASA's Aqua satellite captured this image on Oct. 6, 2012, which shows a plume spewing forth from Russia's Shiveluch volcano and drifting away in the wind, in the span of just two hours.
(Image: © NASA Earth Observatory)

All was calm on Russia's Kamchatka Peninsula when NASA's Terra satellite passed over at noon local time on Saturday (Oct. 6). Or so it seemed.

Two hours later, NASA's Aqua satellite passed over and captured this image of a plume of smoke and volcanic ash extending across the land and out over the Bering Sea. The plume traveled about 55 miles (90 kilometers) southeast, where a change in wind began pushing the plume toward the east.

That day, the Kamchatka Volcanic Emergency Response Team reported that the ash plume from Shiveluch reached an altitude of 9,800 feet (3 km) above sea level and had traveled some 140 miles (220 km) from the volcano, according to NASA.

Shiveluch (also spelled Sheveluch) ranks among the biggest and most active volcanoes on the Kamchatka Peninsula. Rising to 10,771 feet (3,282 m) above sea level, Shiveluch is a stratovolcano composed of alternating layers of hardened lava, compacted ash and rocks ejected in previous eruptions. The beige expanse on the volcano's southern slopes comes from an explosive eruption in 1964, when part of Shiveluch's southern flank collapsed and exposed light-colored rock.

Taken weeks prior to the latest eruption, a pair of satellite images show fall arriving in Siberia, as cool temperatures turned foliage from green to brown.