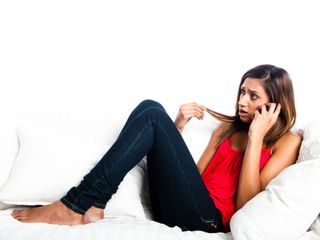 Teens who use their cellphones after "lights out" may be at increased risk for mental health problems, as well as lost sleep, a new study from Japan suggests.

In the study, teens who frequently used their cellphones after going to bed were more likely to have poor mental health and suicidal thoughts, and to have harmed themselves, compared with those who did not use their phones at that time of night.

The link held true even after the researchers took into account other factors known to affect mental health, such as alcohol and drug use.

In addition, among young teens, cellphone use after lights out was linked with shorter time spent asleep, the researchers said.

Researchers caution that the study only found an association, and they cannot say that nighttime cellphone use causes mental health problems or reduced sleep. It could be that teens who use phones after bedtime are a specific group, one already prone to mental health troubles.

However, the findings add to a growing body of research linking poor sleep with mental problems in teens. For instance, a study published last year found that teens who had trouble sleeping were at increased risk for suicidal thoughts and self-harm.

Looking at a bright display and performing tasks that excite the brain may change the production of melatonin, a hormone produced during sleep, and hurt the quality of a night’s rest, the researchers said.

Researchers at the University of Tokyo investigated close to 18,000 adolescents in in junior high and high school in Japan. Participants answered questions designed to assess symptoms of anxiety and depression, and the occurrence of suicidal thoughts and self-harm.

Participants also reported how many hours they slept at night and how often they spoke on their cellphones or sent emails after going to bed.

The findings do not necessarily apply to U.S. children, said Dr. Michael Brody, a child and adolescent psychiatrist in Silver Springs, Md. Japan has a different culture and one of the highest suicide rates in the world.

In addition, the researchers do not know the reasons for the nighttime cellphone use. The children could be reaching out to others at night to talk about their problems, Brody said.

"I wonder how many kids have been saved from destructive activity by talking about it," Brody said.

But Lauren Hale, an associate professor of preventive medicine at Stony Brook University in New York, said the findings were not surprising, given what we know about the link between shortened sleep time and poor mental health.

The cause of that link remains unknown, however. Mental health problems may lead people to stay up late at night and use their phones, for example, Hale said.

In addition, the study failed to take into account other things the children may be doing after lights out. "They watch television, they surf of the web…they play video games, and all of these things are eating into sleep time and may have their own independent consequences," Hale said.

The professor said she is in favor of taking cellphones out of bedrooms. However, further studies will need to be conducted to see if prohibiting late-night cellphone use improves teens' mental health, she said.

The study is published in the October issue of the Journal of Pediatric Psychology.

Pass it on: Cellphone use after "lights out" is linked to mental health problems in teens, but the cause of the link is not clear.