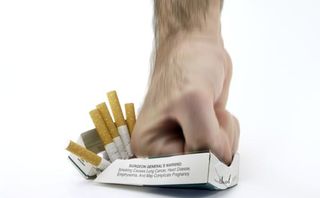 How many Americans die from smoking without even lighting up a cigarette? More than 42,000 people a year, including 900 infants, according to a new, thorough analysis of secondhand smoke deaths by researchers at the University of California, San Francisco.

Altogether, that's 600,000 years of potential life lost — an average of 14.2 years for each nonsmoker who has died prematurely as a result of someone else's smoking — amounting to $6.6 billion in lost productivity.

The early deaths disproportionately affect African-Americans, especially black infants. And the researchers said they are likely underestimating the true impact. Their results are detailed this month in the American Journal of Public Health.

Gets in your blood

The U.S. Centers for Disease Control and Prevention (CDC) has estimated that secondhand smoke causes about 49,000 deaths annually. The data supporting this, however, rely primarily on self-reporting to gauge secondhand smoke exposure, which many researchers consider unreliable.

Furthermore, given the poor air quality in most large American cities, calculating the number of deaths among nonsmokers due to secondhand smoke — as opposed to diesel fumes and coal burning, for example — has been difficult for researchers.

The UCSF researchers took a fresh approach by basing their numbers on a chemical called cotinine in the blood, which is a byproduct of smoking proportional to the amount of exposure to tobacco smoke. Most of us have cotinine in our blood; but those who are exposed to lots of secondhand smoke at home or, for example, at a bar, will have higher levels. [Never Too Late: 5 Habits You Should Still Quit]

This is the first estimate of secondhand smoking deaths and economic impact based on serum cotinine, said the study's lead author, Wendy Max, professor of health economics at the UCSF School of Nursing.

Nevertheless, this is likely an underestimate, Max told LiveScience. She said the number of deaths her team calculated is a statistical estimate, not an identification of particular individuals.

"It is true that smoking is banned in many public places and workplaces," Max said. "However, our use of the biomarker indicates that people are still being exposed more than we realized. Much of this may be at home, but not all. Studies show that even small amounts of secondhand smoke exposure may have a negative impact on health, particularly for people who are vulnerable for various reasons."

The vulnerable include newborns, either exposed in the womb or after birth, and adults with existing heart and lung problems.

The largest toll is on African-Americans. Blacks accounted for 13 percent of all deaths, but up to 36 percent of infant deaths. Black adults had significantly greater exposure rates than did whites in all age groups.

"This burden results in communities of color suffering relatively greater losses," both in health and economic potential to their communities and the nation, the researchers wrote.

Christopher Wanjek is the author of a new novel, "Hey, Einstein!", a comical nature-versus-nurture tale about raising clones of Albert Einstein in less-than-ideal settings. His column, Bad Medicine, appears regularly on LiveScience