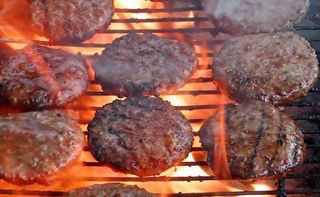 This may put a damper on warm-weather grilling, but a new study suggests a daily serving of processed red meat was associated with a 20 percent increased risk of dying during the study period.
(Image: © Red Meat a Ticket to Early Grave, Harvard Says)

Just in time to spoil the promise of warm-weather picnics, Harvard scientists have found that daily consumption of red meat — particularly the kind you might like to grill — may significantly increase your risk of premature death.

While this much has long been suspected, perhaps even by you, the Harvard-led study is the first nuanced analysis to calculate the risk that a serving of red meat can have on your longevity compared with other protein sources.

The study measures, for example, how much one could expect to lower their risk of early death by replacing pork and beef with poultry, fish, nuts or beans can lower the risk of early death; they found chicken was at least as healthy an alternative to red meat as beans and whole grains.

"This paper does not give a green light to a low-fat, high-carb diet," senior author Frank Hu of Harvard School of Public Health (HSPH) told LiveScience. "Instead, it underscores the importance of types or quality of protein." [7 Foods Your Heart Will Hate]

The study was published today (March 12) online in the journal Archives of Internal Medicine.

The researchers, led by An Pan at HSPH, tapped into two longitudinal health studies — the Health Professionals Follow-Up Study, and the Nurses' Health Study — which capture health and dietary information from approximately 120,000 adults who were free of cardiovascular disease and cancer at the onset of the study and followed for up to 28 years.

This same group of researchers reported last year that a daily serving of cold cuts or hot dogs was associated with a 50 percent increased risk of developing diabetes. Yet the researchers are not anti-meat, per se.

Missing entirely from the new Harvard study is the word "carbohydrate." The study merely looked at different forms of protein sources and found beef and pork to be unhealthier compared with other sources. Both Hu and co-author HSPH colleague Walter Willett have said that added sugar in drinks and in snack foods as well as the simple carbohydrates found in potatoes, white flour and processed foods are the primary causes of obesity and diabetes.

Also, their previous studies have found that a moderately low-carbohydrate diet that includes healthy sources of fat and protein — such as olive oil, nuts, poultry, fish, whole grains and legumes — can better lower the risk of premature death from cardiovascular disease than low-fat, high-carb diets.

Therefore, if you go (or stay) in the low-carb direction, Hu advises that you choose your fats and proteins carefully. "All low-carb diets are not created equal," nor are high-carb diets, he said.

Nevertheless, Dean Ornish, a leading supporter for a low-fat, plant-based diet naturally high in complex carbohydrates, was thrilled with the Harvard study results and wrote an adjoining commentary.

"What we include in our diet is as important as what we exclude, so substituting healthier foods for red meat provides a double benefit to our health," Ornish wrote in the commentary. "We have a spectrum of choices; it's not all or nothing."

For Ornish, those choices would be everything he has advocated for years: the complex, "good" carbs found in whole grains, beans and other vegetables; the "good" omega-3 fats found in some fish and in flaxseed; and protein from beans, nuts, whole grains and fish.

Ornish's gleeful commentary aside, the new Harvard study isn't a complete assault on the Atkins' diet and similar meat-heavy, low-carb diets. Any diet loaded with hamburger, bacon and sausage can lead to premature death, the study reveals, but poultry appears to be at least as healthy an alternative as beans and whole grains.

So what is it about red meat that makes it unhealthier than other protein sources? The Harvard scientists aren't sure. The saturated fat in red meat might not be the sole culprit, as long suspected, they said. The deleterious effects might be a result of the combination of heme iron (iron that comes from hemoglobin, the protein in red blood cells that delivers oxygen to our cells), sodium, nitrates and other chemicals that are created when cooking red meat ... in addition to, of course, all that delicious saturated fat.