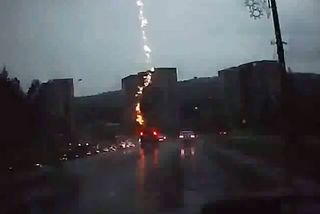 A screengrab from the YouTube video that apparently depicts an SUV being struck by lightning.
(Image: © YouTube | TheFunSpider)

A video posted to YouTube on Sept. 17 shows a few cars cruising slowly down a rainy highway in Russia before a sudden blinding flash gives way to a streak of lightning zapping the roof of an SUV. Afterward, the SUV gradually comes to a stop in a way that seems to suggest that someone inside is still intact enough to press the brakes.

Though Life's Little Mysteries cannot guarantee the video's authenticity (phony lightning videos have gone viral before), if it is real, the unidentified person(s) inside the SUV could have picked a much worse place from which to witness a lightning strike firsthand.

Contrary to a widely held belief, the reason a vehicle turns out to be a relatively safe place to be during a lightning storm has nothing to do with rubber tires.

What is important is a metal frame. Assuming a vehicle's windows are closed and a person is not making contact with metal components on the interior that connect to the frame, lightning will be conducted safely through the car's exterior and grounded through steel belts in the tires, according to the National Weather Service.

Passengers are left unaffected by the charge flowing around the vehicle's exterior because the metal frame acts as a makeshift Faraday cage, an enclosure that conducts an electric charge evenly over its surface so that there is no net effect on the interior. When airplanes are struck by lightning, which happens far more frequently than cars being hit, passengers are typically left unharmed for this same reason.

But engineers expect planes to be hit by lightning and they take appropriate precautions to safeguard their electrical systems. Cars usually don't fare as well.

Though "every lightning strike is different, damage to the antenna, electrical system, rear windshield, and tires is common," the National Weather Service explains.

In the YouTube video, the SUV's brake lights don't even seem to flicker after the bolt hits and there is no apparent tire damage, a consequence the National Weather Service says is particularly likely.

Vehicles, despite making pretty reliable Faraday cages in a pinch (so long as they're made of metal and aren't convertibles), are not as safe as buildings during a lightning storm, according to the National Weather Service.

The Empire State Building is hit by lightning an average of 23 times a year, but it remains a good shelter because its towering antenna doubles as a lightning rod and safely directs a current into the ground.