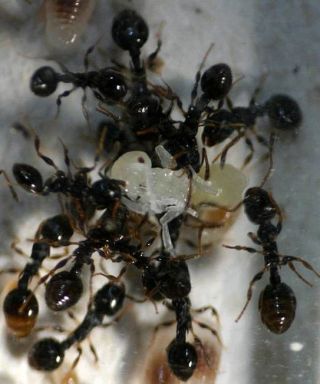 Protomognathus americanus, an American species of slavemaker ant, raids the nests of a neighboring ant species (Temnothorax longispinosus), killing the adult ants and running off with the young. Back at the nests of their oppressors, the enslaved ants are forced to bring the masters food, defend their nest and care for their larvae.

"Probably at first the slaves cannot tell that the larvae belong to another species," explained study researcher Susanne Foitzik. But when the larvae transform into pupae, their slave caretakers turn on them. The slave ants either neglect the young insects or launch outright attacks on the offspring, often ripping them apart.

"The pupae, which already look like ants, bear chemical cues on their cuticles that can apparently be detected," Foitzik, of Johannes Gutenberg University in Germany, said in a statement. "We have been able to show that a high fraction of the slavemaker pupae are killed by slave workers."

Under normal conditions, P. americanus pupae have an 85 percent chance of survival, but the researchers found this rate drops when enslaved caretakers enter the mix. In nests in West Virginia, only 27 percent of the slavemaker pupae survived. In colonies in New York and Ohio, the survival rate was observed to be 49 percent and 58 percent, respectively. As this phenomenon was found in different populations across three U.S. states, the researchers believe this rebellious behavior is widespread among T. longispinosus.

The researchers believe the deadly acts of sabotage may reduce the strength of the slavemaker ants' colonies and may keep them from launching further slave raids on other T. longispinosus nests.

The study was published in a recent edition of the journal Evolutionary Ecology.