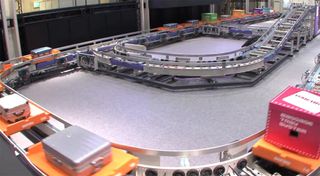 Japan's love of speedy travel goes beyond its bullet trains that whisk thousands of passengers to and from work each day. Even its airport baggage systems must run at high speed as they carry luggage from one terminal to another.

The Daifuku Baggage Tray System puts any U.S. airport's slow conveyor belts to shame with top speeds of almost 2,000 feet per minute (600 meters per minute), according to DigInfo News. Each piece of baggage sits on its own separate tray that can follow its own path through converging or diverging tracks.

That may sound confusing, but the system keeps everything tidy through the use of radio-frequency identification (RFID) tags that track what baggage should go where.

No other countries have leaped onto the rollercoaster-style baggage system for a ride just yet, but Japan's Daifuku company hopes to find customers in Asia and the Middle East. It has also begun testing a similar concept for an automated warehouse in the UK — perhaps signaling possible competition for the U.S. robotic warehouse company Kiva.