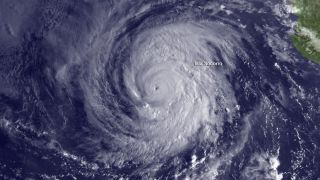 The NOAA GOES-14 satellite took this image of Hurricane Miriam today (Sept. 24) as the storm swirled west of the Baja peninsula.
(Image: © NOAA/NASA)

The eastern Pacific Ocean basin has been relatively quiet recently—that is, until the formation of Hurricane Miriam, the ninth hurricane of the season to form in the eastern Pacific. Miriam is strengthening and has developed a symmetrical shape and eyewall, as seen in this image taken by the National Oceanographic and Atmospheric Administration's GOES-14 satellite today (Sept. 24).

This morning, Miriam became a Category 3 storm on the Saffir-Simpson scale, making it a major hurricane, and it could potentially strengthen to become a Category 4, according to the National Hurricane Center (NHC). The storm has maximum sustained winds of 120 mph (195 kph), as of the latest NHC update.

Swirling over warm waters and through relatively calm, high-level winds, Miriam strengthened quickly yesterday, and is expected to continue growing in strength until at least tomorrow morning, AccuWeather reports.

The storm could lash Baja California with rains and winds later this week. However, as Miriam moves north into cooler Pacific waters, it's expected to weaken slowly. If it hits the Mexican peninsula, it may make landfall as only a tropical storm.

But residents on the peninsula's western coast should be cautious due to increased wave action and rip currents. Miriam's winds and rains could arrive in the central peninsula as early as Thursday night or Friday, according to AccuWeather.

The storm is currently about 400 miles (645 kilometers) to the southwest of the tip of the Baja peninsula and is moving to the northwest at 12 mph (19 kph), the NHC reports.