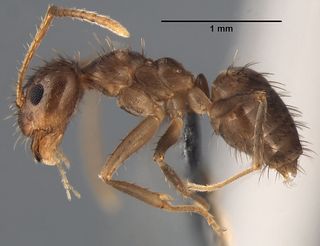 The worker ant of the species Nylanderia pubens, shown here, is virtually identical to the Rasberry crazy ant, though of a different species.
(Image: © Gotzek D, Brady SG, Kallal RJ, LaPolla JS (2012) The Importance of Using Multiple Approaches for Identifying Emerging Invasive Species: The Case of the Rasberry Crazy Ant in the United States. PLoS ONE 7(9): e45314. doi:10.1371/journal.pone.0045314)

An invasive insect known for a decade as the Rasberry crazy ant now has a scientific moniker, say scientists who have identified the pest for the first time.

The ant first showed up in Houston in 2002 and is now found in at least 21 Texas counties and parts of Mississippi and Louisiana. Individually, the ants are unassuming creatures, about an eighth of an inch long and reddish-brown. As a group, they form huge colonies and have a tendency to short out important electrical equipment by congregating around outlets and wires.

Entomologists soon realized they were dealing with an ant of the genus Nylanderia, one of the most common genuses of ant in North America. Little modern work has been done on this large group of ants, however, so scientists could not pinpoint the exact species, said study researcher John LaPolla, a taxonomist at Towson University in Maryland. In lieu of a scientific classification, the ants were named after their discoverer, exterminator Tom Rasberry, and for their erratic way of walking. [Image Gallery: Amazing Photos of the World's Ants]

Now, LaPolla and his colleagues have given the ant its scientific name for the first time: Nylanderia fulva, a species that was first described in Brazil and lives across South America and the Caribbean. The researchers compared specimens of Rasberry crazy ant with other Nylanderia samples, using both genetic data and measurements of the ant bodies. The process was tricky, LaPolla told LiveScience, because two likely species, N. fulva and N. pudens, have nearly identical worker ants. To differentiate between the two, the scientists had to focus on the male ants' genitals.

"Sort of a running joke among entomologists who do taxonomy is that we spend a lot of time looking at the naughty bits of insects," LaPolla said. "And the reason for that is because there are often some distinct features that help separate the species."

Those features and the genetic data put the Rasberry crazy ant in the N. fulva category, the researchers report today (Sept. 19) in the journal PLoS ONE. Knowing the ant's name is useful, LaPolla said, because it can put entomologists on the right track to look for natural predators that might keep the invasive ant in check. The Rasberry crazy ant is a nuisance for homeowners, and it could potentially drive out native ants, in addition to shorting out electrical appliances. In 2008, NASA's Johnson Space Center in Houston had to call in experts to prevent the ants from moving into their computer equipment.

Knowing an invasive species' name and classification can also help customs officials to know what to watch for at ports of entry, LaPolla said. It also helps researchers understand how the organism functions in its natural habitat.

"Being able to give something a name puts it within some sort of natural order so we can start to talk about it in a coherent way," he said.

The next step, LaPolla said, will be to take a closer look at the crazy ant's genetics to find out more about where it came from.