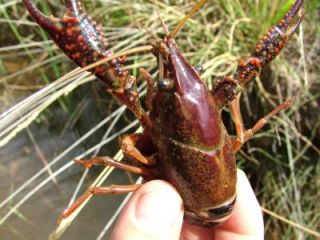 The red swamp crayfish carries hundreds of tiny crustaceans on its back.
(Image: © Juan Rueda Sevilla)

When the red swamp crayfish invaded Europe more than 30 years ago, it may have smuggled another species overseas.

Scientists say they've found an alien type of tiny crustacean in Spain, and evidence suggests it came from North America on the back of the crayfish.

A team of researchers collected 203 red swamp crayfish (Procambarus clarkii) from a dozen different sites along the Iberian Peninsula between 2003 and 2009. They found that 147 crayfish across almost all of the sampled regions were carrying ostracods known as Ankylocythere sinuosa, little crustaceans no more than a half-millimeter in length that lay their eggs on the crayfish. The ostracods need the crayfish to survive, not only laying their eggs on them but also clinging onto the crayfish as they develop.

"Ankylocythere sinuosa is common and abundant wherever there is the red swamp crayfish in Europe," lead researcher Francesc Mesquita Joanes, of the University of Valencia, told Spain's Scientific Information and News Service (SINC). Mesquita-Joanes added that adult crayfish can have up to many hundreds of ostracods on them.

The researchers, who recently published their study in the journal Hydrobiologia, note that in North America, red swamp crayfish often host a range of other ostracods, but they only seem to have brought Ankylocythere sinuosa to Europe.

The team said more studies are needed to find out whether these piggy-backing critters can live off native European crayfish.

They also plan to investigate whether the tiny creatures help or hinder the expansion of the invasive red swamp crayfish, which first came to Spain in the 1970s. For example, the ostracods might help by cleaning parasites and contamination off the crayfish, or harm it by feeding off its eggs.

For now, "they seem to basically be just guests and do neither good nor bad to the crayfish," Mesquita-Joanes told SINC. "But this is debatable."